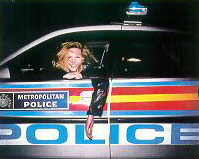 I would have joined the police force, only I run slower than Mrs Merton and have all the authority of Barbie.

I cannot tell my left from my right, and when frightened I lose control of my critical faculties. Long ago, I accepted it would be better for everyone if I stayed at home, out of harm’s way.

I cannot imagine what inducements were offered to Colindale Police Station to let me accompany their night patrol. Small wonder that they asked me to sign an indemnity form before setting off.

The area squad car is the Batmobile of the fleet the front line of attack, the first response to any 999 call. We leave the station at 11pm, PC`s Simon Wilson and Stephen Hawkins in the front, Julia-Ann (the police press-officer) and me in the back.”Do I have to buckle up?” I ask.”Once we get going, you’ll want to,” replies PC Hawkins. He never exaggerates, I come to realise as the night progresses. He is an officer’s officer, fifteen years on the force, and married to a WPC.

After a few minutes of awkward silence while the car patrols down deserted streets, PC Wilson breaks the ice: “I like this job because every day is different. But you see terrible things.” “Yeah,” adds Julia-Ann, who goes on any assignment that involves the press, from controlling access to the gruesome, shocking, or tragic cases that end up as news stories to baby-sitting Dempsey & Makepeace fantasisers such as me.”That man we found dead in his house last week,” she says.”He’d been lying there for over a month; when they picked up the body, half of him stuck to the carpet.” We check out the alleyways, car parks, and trouble spots. It is amazing how many lovers take to their cars between midnight and 1am. They blink in surprise when the searchlight on Sierra Two interrupts their activities. just as PC Wilson launches into his own love life, the conversation is halted by the first 999 call of the night.

The sudden thrust from 20 to 70mph pins my shoulders to the seat. The sensation of a dozen quick turns, split second swerves, and emergency braking is thrilling for the first five minutes, stomach-churning for the next.

The call-out is to a burglary. Control passes on that the owner is in the house and beside himself with fear. No one speaks as the car screeches to a halt and Wilson and Hawkins jump out. Ten minutes later, and the drama of The Bill has given way to Monty Python.

The owner had lost his walkabout phone and panicked, convincing himself that someone was hiding in the house.

It’s back to silent prowling around. My eyes grow heavy. The crackle of the radio jerks me awake Hendon police training college is under attack “Can you repeat that?” PC Wilson says. “You’d think they knew how to defend themselves,” mutters Hawkins. Every police car in Colindale is racing to the scene (more stomach-heaving twists and turns).

The attacker is a suicidally depressed woman who tried to crash her car into the barrier-gate. She has no shoes and just a thin pair of pyjamas against the cold early hours. The officers treat her with the detached sympathy that comes with over exposure to human weakness.

“It’s a quiet night tonight,” muses PC Hawkins. “Sometimes you get call after call, domestics, robberies, disturbances.” On our way to check out a burglar alarm, we pass some wreaths on the roadside. “He was only eighteen,” says Julia-Ann. “joyriders crashed into his car and he hit a juggernaut.”

It’s a quiet night in an unquiet world.