Extract from the UK version of Georgiana, Duchess of Devonshire 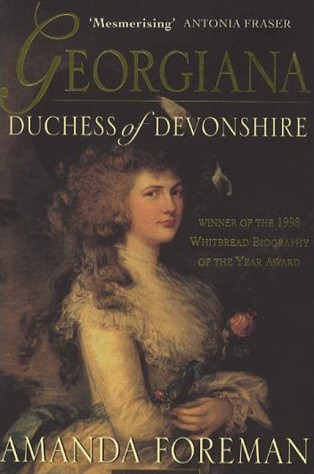 The chief attraction of Devonshire House was the public rooms, which were larger and more ornate than almost anything to be seen in London. A crowd of 1,200 could easily sweep through the house during a ball, a remarkable contrast to some great houses where the crush could lift a person off his feet and carry him from room to room. Guests entered the house by an outer staircase which took them directly to the first floor. Inside was a hall two storeys high flanked on either side by two drawing rooms of identical size. Beyond the hall was another, even larger drawing room, several anterooms and the dining room. Some of the finest paintings in England adorned the walls, including Rembrandt’s Old Man in Turkish Dress, and Poussin’s Et in Arcadia Ego.

Georgiana and the Duke were naturally placed to become the leaders of society’s most select group, known as the ton or “the World” – the ultra-fashionable people who decided whether a play was a success, an artist a genius, or what colour would be “in” that season. Henry Fielding was only half-joking when he said that “Nobody” was “all the people in Great Britain, except about 1200.” The ton certainly believed this to be the case. The writer and reluctant courtier Fanny Burney made fun of its self-absorption in Cecilia: “Why, he’s the very head of the ton,” Miss Laroues says of Mr Matthews. ‘There’s nothing in the world so fashionable as taking no notice of things, and never seeing people, and saying nothing at all, and never hearing a word, and not knowing one’s own acquaintance, and always finding fault; all the ton do so.’

The social tyrants who made up the ton also considered it deeply unfashionable for a wife and husband to be seen too much in each other’s company. The Duke escorted Georgiana to the opera once and then resumed his habit of visiting Brooks’s, where he always ordered the same supper – a broiled blade-bone of mutton and played cards until five or six in the morning.” Occasionally they went to a party together but Georgiana was expected to make her own social arrangements. There was no shortage of invitations and she accepted everything routs, assemblies, card parties, promenades in the park in an effort to avoid sitting alone in Devonshire House.

With her instinctive ability to make an impression, Georgiana immediately caused a sensation. She always appeared natural, even when she was called upon to open a ball in front of 800 people. She could engage in friendly chatter with several people simultaneously, leaving each with the impression that it had been a memorable event. She was “so handsome, so agreeable, so obliging in her manner, that I am quite in love with her,” Mrs Delany burbled to a friend. “I can’t tell you all the civil things she said, and really they deserve a better name, which is kindness embellished by politeness. I hope she will illumine and reform her contemporaries!” Even cynics like Horace Walpole found their resistance worn down by Georgiana’s unforced charm and directness. Observing her transformation into a society figure, Walpole marvelled that this “lovely girl, natural, and full of grace” could retain these qualities and yet be so much on show. “The Duchess of Devonshire effaces all,” he wrote a few weeks after her arrival in London. She achieved it “without being a beauty; but her youth, figure, flowing good nature, sense and lively modesty, and modest familiarity, make her a phenomenon.”

The few voices raised in criticism of Georgiana were not heeded, except by Lady Spencer. “I think there is too much of her,” was one woman’s opinion. “She gives me the idea of being larger than life.” Lady Mary Coke thought Georgiana was making herself ridiculous and that her behaviour occasionally verged on hysteria. The Duchess went to visit Lady Harriet Foley, she wrote, just as her house and contents were being seized by the bailiffs, and “as her Grace’s misfortune is a very unnatural one, that of being too happy and of being delighted with everything she hears and sees, so the situation in which she found Lady Harriet was, in her Grace’s opinion, Charming; Lady Harriet told her she had no clothes, this was charming above measure.”

Occasionally Georgiana drank too much, especially when she was nervous, and showed off as a result: “nothing is talked of but the Duchess of Devonshire: and I am sorry to say not much in her favour,” wrote a society lady after Georgiana upset a dignified matron by pulling out her hair feathers. “Lady Mary Coke went to Ranelagh and was disgusted to see Georgiana and her new friends amusing themselves by puffing out their cheeks and popping them.” She could be persuaded to do anything: once she even appeared on stage at Hampton Court and danced in an opera organized by the fashionable wit and playwright Anthony Storer. Lady Spencer was worried when she saw how easily her daughter could be influenced: “when others draw you out of your own character, and make you assume one that is quite a stranger to you, it is difficult to distinguish you under the disguise,” she warned.” Mrs Delany feared that rather than reforming her contemporaries Georgiana was more likely to be corrupted by them: ‘This bitter reflection arises from what I hear everybody says of a great and handsome relation of ours just beginning her part; but I do hope she will be like the young actors and actresses, who begin with overacting when they first come upon the stage but I tremble for her.”

Lady Spencer could see that Georgiana was falling in with the fast set. The gambling in particular worried her: “let me entreat you to beware of it, and if [gambling] is mention’d to you any more, to decline the taking any part in it,” she begged. Gaming was to the aristocracy what gin was to the working classes: it caused the ruin of families and corrupted people’s lives. “A thousand meadows and cornfields are staked at every throw, and as many villages lost as in the earthquake that overwhelmed Herculaneum and Pompeii,” wrote Horace Walpole, who had seen men lose an entire estate in a single night. “Play at whist, commerce, backgammon, trictrac or chess,” Lady Spencer urged, “but never at quinze, Ion, brag, faro, hazard or any games of chance, and if you are pressed to play always make the fashionable excuse of being tied up not to play at such and such a game. In short I must beg you, my dearest girl, if you value my happiness to send me in writing a serious answer to this.” Lady Clermont, who had known the Spencer family for many years, counselled Lady Spencer against being too critical: “I hope you don’t talk to her too often about trifles, when she does any little thing that is not right … If we can but keep her out of the fire for a year or two, or rather from being burned, for in the fire she is, it will all be well.” But Lady Spencer was too worried to listen; instead she tried to frighten Georgiana into adopting a more mature exterior. “You must learn to respect yourself,” she wrote in April 1775, “and the world will soon follow your example; but while you herd only with the vicious and the profligate you will be like them, pert, familiar, noisy and indelicate, not to say indecent in their contempt for the censures of the grave, and their total disregard of the opinion of the world in general, you will be lost indeed past recovery.”

Georgiana as dependent on parental approval as ever felt guilty and went to even greater lengths to distract herself with frivolity. Her recklessness entranced society even as it caused disapproval. Whatever she wore became instantly fashionable. Women’s hair was already arranged high above the head, but Georgiana took the fashion a step further by creating the three-foot hair tower. She stuck pads of horse hair to her own hair using scented pomade and decorated the top with miniature ornaments. Sometimes she carried a ship in full sail, or an exotic arrangement of stuffed birds and waxed fruit, or even a pastoral tableau with little wooden trees and sheep. Even though the towers required the help of at least two hairdressers and took several hours to arrange, Georgiana’s designs inspired others to imitate her. “The Duchess of Devonshire is the most envied woman of the day in the Ton,” the newspapers reported. It was true; women competed with each other to construct the tallest head, ignoring the fact that it made quick movements impossible and the only way to ride in a carriage was to sit on the floor.

Another of Georgiana’s innovations was the drooping ostrich feather, which she attached in a wide arch across the front of her hair. In April Lord Stormont, the British ambassador in Paris, presented her with one that was four feet long. Overnight it became the most important accessory in a lady’s wardrobe, even though the tall nodding plumes were difficult to find and extremely expensive. The ton wore them with a smug arrogance which infuriated the less fortunate. The fashion generated resentment: it was too excessive and too exclusive. The Queen banned ostrich feathers from court, and according to Lady Louisa Stuart, the unfortunate feathers were insulted, mobbed, hissed, almost pelted wherever they appeared, abused in the newspapers, nay even preached at in the pulpits and pointed out as marks of reprobation.

In less than a year Georgiana had become a celebrity. Newspaper editors noticed that any report on the Duchess of Devonshire increased their sales. She brought glamour and style to a paper. A three-ring circus soon developed between newspapers who saw commercial value in her fame, ordinary readers who were fascinated by her, and Georgiana herself, who enjoyed the attention. The more editors printed stories about her, the more she obliged by playing up to them. Her arrival coincided with the flowering of the English press. A growing population, increased wealth, better roads, and an end to official censorship had resulted in a wider readership and more news to report. By the end of the 1770s there were nine daily newspapers, all based in London, and hundreds of bland triweekly provincial papers which reprinted the London news. For the first time national figures emerged, Georgiana among them, which the whole country read about and discussed, and with whom they could feel some sort of connection.