The Awful End of William The Silent 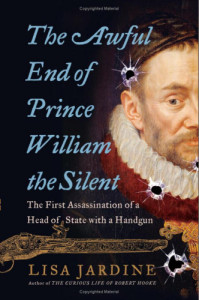 William the Silent may be an obscure name for many readers, but his assassination in 1584, at close range with a handgun, is still remembered in the Netherlands as a key event in the long Dutch struggle for independence from Spain. Born to a German family, William inherited a French principality and was raised under the tutelage of the Catholic Emperor Charles V, yet became the “father” of Netherlands Protestant national identity. Jardine (The Curious Life of Robert Hooke) places the assassination within the era’s religious turmoil and espionage systems, arguing for its deep repercussions for security, diplomacy and warfare. Her scholarship is broad, as she dissects William’s lasting reputation for tolerance as a product of the writings of his supporters and traces the technology, uses and symbolism of the wheel-lock pistol used to kill him. With modern references including 9/11, fatwahs and Tupac Shakur, Jardine demonstrates the pervasiveness of the issues raised both by this type of weapon and by responses to crimes of state. Some readers might wish for a more narrative approach to such a potentially riveting story, but they will enjoy this marvelous study of a single event and its numerous echoes.