It was not that I lacked faith in the producers’ talents. But as the years passed and the promised film version of ‘Georgiana, Duchess of Devonshire’, never materialized, I just assumed that my book would always remain a book. Anyway, it seemed churlish to complain since Radio 4 had already produced a wonderful 14-part drama about Georgiana, staring Judi Dench, Maggie Steed and Juliet Aubrey.

Privately, I wondered how anyone could turn Georgiana’s life into a mere two hours. ‘Please don’t be annoyed by it’, begged Gabrielle Tana, the film’s producer, when she handed me the script by Anders Jensen, an Oscar-winning writer from Denmark. Her words frightened me and I couldn’t bring myself to look at the script until the night before I visited the set at Kedleston. By ignoring it for so long I could truthfully avoid answering the question, “What do you think of the film?”. Parents who have been asked, “What do you think of your daughter’s fiancé?”, and other awkward questions will know why I did my utmost to delay the inevitable.

My contract stipulated that I had to be on the set for ten days, to provide background information or advice as needed. As I drove up to the drive to the house, past the peacefully grazing sheep, a scene of mad activity suddenly came into view. The car park was full to bursting. Great hulking lorries obscured Kedleston’s famous portico. Massive lights and cables colonized the forecourt. No one was standing still except for the extras who clustered together in awkward little groups, gingerly wearing in their freshly pressed costumes. I climbed out of the car feeling very small and unimportant.

I wasn’t sure where to go and suddenly felt rather shy about approaching one of the many earpiece people who brushed past me. Instead I mingled anonymously through the open rooms. There was something vaguely familiar about the house and then it struck me. I had seen Kedleston as a child, in the 1981 series The Nanny, staring Wendy Craig. I wondered if the BBC had been as careful with the house then as the film makers were being now. I noticed that none of the equipment was allowed to touch the walls, or lean against anything. The elaborate marble floor in the great hall had been covered by an exact wooden replica. The dining room had become a storage place for chairs too fragile to withstand an accidental knock or kick.

Eventually, my wonderings brought me face to face with Victoria Flanagan, the National Trust’s property manager. Her cheerful energy belied the fact she had been working since six in the morning, and had hardly enjoyed a moment’s rest in three weeks. It had taken four solid days to clear and prepare the house for filming, she told me. At one point, the set contained over three hundred people, pushing the cafeteria to new heights of efficiency. Rumour had it that the food had never tasted so good.

It was towards the end of the afternoon when I finally caught up with the producers. Gabriella Tana looked at me quizzically. My long silence about the script had made her worried. I quickly owned up to the fact I had been too frightened to read it. “But now I have, and it’s wonderful,’ I said. It was true. Anders Jensen had found a way through all the complicated side-issues of Georgiana’s life to concentrate on the tangled relationship between the Devonshires and Lady Elizabeth Foster known as Bess. Some scripts can be difficult to read but Jensen’s was gripping from start to finish.

During my second day at Kedleston, all the scenes were shot outside. I watched in the cold autumn sunshine as Georgiana and Bess enjoyed a summer’s walk in the countryside around ‘Bath’. The scene in question was meant to depict their first proper encounter. At first I couldn’t stop myself from comparing the dialogue to the voices that had been in my head when I wrote the book. But after a couple of hours of pointless torture it occurred to me that I was behaving like a stage mother. Instead of enjoying my ‘offspring’s’ success and being proud of her achievements, I was dwelling on how I might have done it differently. No wonder directors are notoriously reluctant to have authors on the set.

Once I had silently talked myself out of my funk I was able to stand back and admire the beauty of the tableau before me. The scene had been designed with the precision of a painter’s eye, part Gainsborough, part Renoir. I noticed the beautiful costumes and the way the natural light reflected off the shiny silk. It was fascinating to watch as over and over again, Kiera Knightly (Georgiana) and Hailey Atwell (Bess) repeated the same scene, trying out different stresses and pauses each time. Their professional commitment jump-started my own dormant professionalism. Thus, when the director, Saul Dibb, asked me if I had any comments to make, I praised everything first and then proffered a few suggestions about eighteenth century deportment and etiquette. Mindful of my inner stage-mother I was careful not to imply the slightest criticism or disappointment.

Returning home that night, all my worries had gone and in their place was a profound sense of fulfillment. My visit to Kedleston had been reassuring in so far as I could relax about the film-makers’ intent. Everyone was doing their best, and that is the most any author has the right to expect. Something wonderful and exciting was happening which had been originated by me but was completely independent. The film-makers had created their own Georgiana – a fully fledged adult to the child of my imagination. Now, if confronted with the dreaded question of what did I think, I would be able to say with total honesty, “I am very proud.” 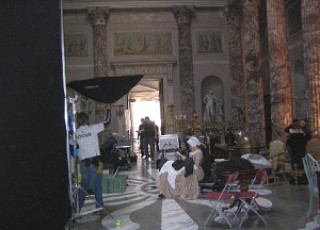 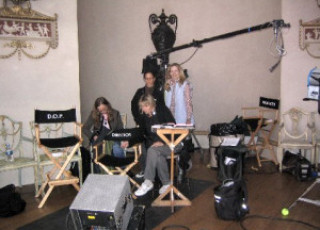 With the producer, Gabby Tana 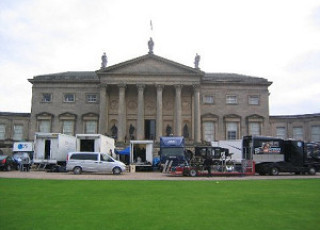 Kedleston taken over by the film crew 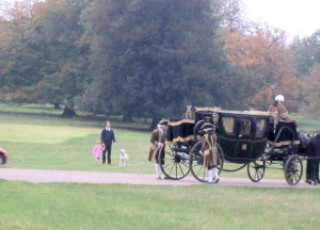 The Curzon family watching the coach 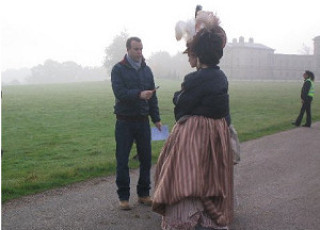 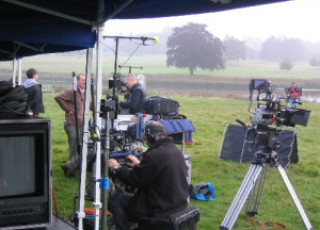 The view from the cameras 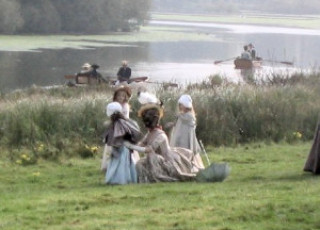 What the cameras saw 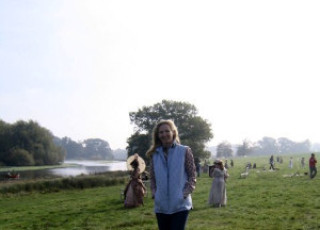