The Telegraph: Women’s rights were never sacrificed at Stonehenge 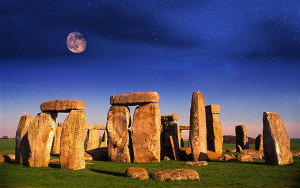 The ancient Stonehenge site will be illuminated by a sparkling fire show from Compagnie Carabosse, during the London 2012 Festival

Nobody really knows why Stonehenge was built, or what it meant to the Neolithic Britons who congregated beneath. But that matters far less than the stupendous findings in Aubrey Hole 7, one of many burial pits around the stone circle.

Thanks to painstaking bone analysis by British archaeologists, it has been confirmed that Stonehenge wasn’t a refuge for fed-up male druids so they could hang out together without being bothered by the ladies. Women were there too – and what’s more, they enjoyed the same status as men. All those children’s history books showing a bunch of hairy men doing man-things around a fire are going to have to redo their artwork.

It is impossible to exaggerate the importance of the news that gender equality existed in Britain as late as the Third Millennium BC. It means that a thousand years after agriculture reached the islands, the sexes were still living and functioning together along egalitarian lines. It means that many of our modern notions about the primacy of men, about women being the second sex, and inequality being intrinsic to the human condition, are just dead wrong. We can move on to other battles. Thank the Lord.