Before there was Halloween, there were costume balls and Carnival, among other occasions for the liberation of dressing up

Costume parades and Halloween parties are back after being canceled last year. Donning a costume and mask to go prancing around might seem like the height of frivolity, but the act of dressing-up has deep roots in the human psyche.

During the early classical era, worshipers at the annual festivals of Dionysus—the god of wine, ritual madness and impersonation, among other things—expanded mask-wearing from religious use to personal celebrations and plays performed in his honor. Masks symbolized the suspension of real world rules: A human could become a god, an ordinary citizen could become a king, a man could be a woman. Anthropologists call such practices “rituals of inversion.”

In Christianized Europe, despite official disapproval of paganism, rituals of inversion not only survived but flourished. Carnival—possibly a corruption of the Latin phrase “carne vale,” farewell to meat, because the festival took place before Lent—included the Feast of Fools, where junior clergymen are alleged to have dressed as nuns and bishops and danced in the streets.

By the 13th century, the Venetians had taken to dressing up and wearing masks with such gusto that the Venice Carnival became an occasion for ever more elaborate masquerade. The city’s Great Council passed special laws to keep the practice within bounds, such as banning masks while gambling or visiting convents. 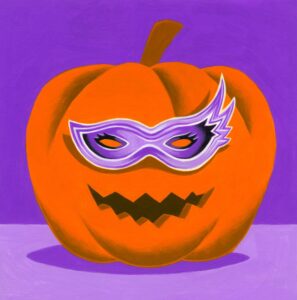 The liberation granted by a costume could be dangerous. In January of 1393, King Charles VI of France and his wife, Isabeau of Bavaria, held the Bal des Sauvages, or Wild Men’s Ball, to celebrate the wedding of one of her ladies-in-waiting. The king had already suffered his first bout of insanity, and it was hoped that the costume ball would be an emotional outlet for his disordered mind. But the farce became a tragedy. The king and his entourage, dressed as hairy wild men, were meant to perform a “crazy” dance. Horrifically, the costumes caught fire, and only Charles and one other knight survived.

The masked ball became a staple of royal entertainments, offering delicious opportunities for sexual subterfuge and social subversion. At a masquerade in 1745, Louis XV of France disguised himself as a yew tree so he could pursue his latest love, the future Madame de Pompadour. Meanwhile, the Dauphine danced the night away with a charming Spanish knight, not realizing he was a lowly cook who had tricked his way in. More ominously, a group of disaffected nobles in Sweden infiltrated a masquerade to assassinate King Gustav III of Sweden in 1792. Five years later, the new ruler of Venice, Francis II of Austria, banned Carnival and forbade the city’s residents to wear masks.

Queen Victoria helped to return dress-up parties to respectability with historically-themed balls that celebrated creativity rather than debauchery. By 1893, American Vogue could run articles about fabulous Halloween costumes without fear of offense. The first Halloween parade took place not in cosmopolitan New York but in rural Hiawatha, Kansas, in 1914.

In the modern era, the taint of anarchy and licentiousness associated with dressing-up has been replaced by complaints about cultural appropriation, a concern that would have baffled our ancestors. Becoming what we are not, however briefly, is part of being who we are.