Someone in California won this month’s $2.04 billion Powerball lottery—the largest in U.S. history. The odds are staggering. The likelihood of death by plane crash (often estimated at 1 in 11 million for the average American) is greater than that of winning the Powerball or Mega Millions lottery (1 in roughly 300 million). Despite this, just under 50% of American adults bought a lottery ticket last year.

What drives people to risk their luck playing the lottery is more than just lousy math. Lotteries tap into a deep need among humans to find meaning in random events. Many ancient societies, from the Chinese to the Hebrews, practiced cleromancy, or the casting of lots to enable divine will to express itself. It is stated in the Bible’s Book of Proverbs: “The lot is cast into the lap, but its every decision is from the Lord.”

The ancient Greeks were among the first to use lotteries to ensure impartiality for non-religious purposes. The Athenians relied on a special device called a “kleroterion” for selecting jurors and public officials at random, to avoid unfair interference. The Romans had a more terrible use for drawing lots: A kind of collective military punishment known as “decimation” required a disgraced legion to select 1 out of every 10 soldiers at random and execute them. The last known use of the practice was in World War I by French and possibly Italian commanders.

The Romans also found less bloody uses for lotteries, including as a source of state revenue. Emperor Nero was likely the first ruler to use a raffle system as a means of filling the treasury without raising taxes. 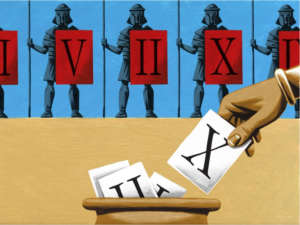 Following the fall of Rome, lotteries found other uses in the West—for example, as a means of allocating market stalls. But state lotteries only returned to Europe after 1441, when the city of Bruges successfully experimented with one as a means to finance its community projects. These fundraisers didn’t always work, however. A lack of faith in the English authorities severely dampened ticket sales for Queen Elizabeth I’s first (and last) National Lottery in 1567.

When they did work, the bonanzas could be significant: In the New World, lotteries helped to pay for the first years of the Jamestown Colony, as well as Harvard, Yale, Princeton, Columbia and many other institutions. And in France in 1729, the philosopher Voltaire got very rich by winning the national lottery, which was meant to sell bonds by making each bond a ticket for a jackpot drawing. He did it by unsavory means: Voltaire was part of a consortium of schemers who took advantage of a flaw in the lottery’s design by buying up enormous numbers of very cheap bonds.

Corruption scandals and failures eventually took their toll. Critics such as the French novelist Honoré de Balzac, who called lotteries the “opium of poverty,” denounced them for exploiting the poor. Starting in the late 1820s, a raft of anti-lottery laws were enacted on both sides of the Atlantic. Debates continued about them even where they remained legal. The Russian novelist Anton Chekhov highlighted their debilitating effects in his 1887 short story “The Lottery Ticket,” about a contented couple who are tormented and finally turned into raging malcontents by the mere possibility of winning.

New Hampshire was the first American state to roll back the ban on lotteries in 1964. Since then, state lotteries have proven to be neither the disaster nor the cure-all predicted. As for the five holdouts—Alabama, Alaska, Hawaii, Nevada and Utah still have no state lotteries—they are doing just fine.