From oracular riddles to the daily Wordle, humans have always had the urge to decode

In 2021, a software engineer named Josh Wardle uploaded Wordle, a 5-letter word puzzle, for a few friends and relatives. By February this year, the number of players had jumped to the millions, and Wardle’s daily Wordle game had become a global phenomenon and the property of the New York Times.

Wordle’s success is unusual but not unprecedented. The urge to decode patterns lies deep within the human psyche. Puzzles, whether mathematical or linguistic, were originally associated with cosmic truths and celestial communication. In the Rhind papyrus, which the British museum dates to around 1550 B.C., the Egyptian scribe Ahmes presented 84 mathematical problems that he claimed contained the key to “knowledge of all existing things.” The Chinese I Ching, or Book of Changes, a set of 64 hexagrams (six-lined figures) thought to have been written dow 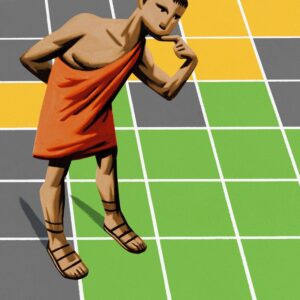 n with commentary around 800 B.C., was also said to provide a basis for understanding the universe.

The Greeks saw riddles as a means of interacting with the gods. Pilgrims would visit oracles, believing that the gods spoke through their priestesses by means of riddles. Interpreting these utterances, however, was fraught with danger. According to Herodotus, King Croesus of Lydia took the Oracle of Delphi’s prediction that a great empire would fall if he attacked the Persians to mean that victory was assured. It was—for the Persians.

With the spread of literacy, anagrams and acrostics became an alternative medium for heavenly messaging. The Hebrew Bible contains several examples, including the alphabetic acrostic Psalm 119, which symbolizes the presence of God in everything from A to Z (aleph to tav).

It remains a matter of scholarly dispute whether the acrostic Sator Square, a two-dimensional, five-line palindrome square made up of five five-letter Latin words, was just clever Roman graffiti or a means of transmitting Christian messages. From its earliest appearance in 1st-century Pompeii, the Sator Square has been found in medieval churches across Europe. It may have started out as a bit of fun, but it ended up as something deeply serious.

One of the most famous nonreligious word squares is “Xuanji Tu,” composed by the 4th-century Chinese poet Su Hui to win back her errant husband. The 29-by-29-character grid can be read in any direction and is said to contain 7,958 poems.

Although word squares, puzzles and riddles gradually shed their magical connotations, their popularity in the West remained undimmed. During the 17th century, King Louis XIII of France even employed his own Royal Anagrammatist. In colonial America, Benjamin Franklin wisely included all manner of puzzles in his Poor Richard’s Almanack.

The Disney-fication of Lewis Carroll’s 1865 fantasy novel, “Alice’s Adventures in Wonderland,” has obscured its triumph as a game of language from start to finish. An Oxford mathematician, Carroll was an inveterate puzzler. His playful inventions include an early form of scrabble and the “word ladder,” whereby a series of one-letter changes transforms a word into its opposite.

By contrast, the crossword was born of necessity. In 1913, Arthur Wynne, the color supplement editor of Joseph Pulitzer’s New York World, had a blank page to fill and resorted to a word-square puzzle. He called it a “word-cross” and invited readers to complete the grid by solving a series of clues. Like Wordle, the game became an overnight sensation. Nevertheless, it took 85 years for crossword puzzles to achieve the ultimate accolade of civilization—a place in The Wall Street Journal.