WSJ Historically Speaking: Barbie and Her Many Ancient Sisters 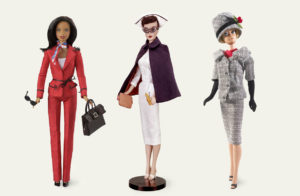 Since her arrival in 1959, Barbie has evolved into an international phenomenon with a grip on modern culture. Her success testifies to the genius of the doll’s creator, Ruth Handler—born 100 years ago this week.

Some social commentators call Barbie, with her strikingly varied career choices, an avatar for women’s liberation. Others call her a tool of patriarchal oppression, beginning with her anatomy—which, according to one scientific analysis, would force her to walk on all fours if she were alive, due to her tiny feet and top-heavy body.

Handler stoutly rejected her critics. She saw Barbie as having totemic value in society. “My whole philosophy of Barbie was that, through the doll, the girl could be anything she wanted to be,” Handler wrote in her autobiography. Her Barbie is nothing like the baby doll, invented in the 19th century, which specifically encourages little girls to practice their mothering skills. Nor is she a child-woman like the American Girl Doll, which idealizes a wholesome girlishness. Instead, Barbie offers young girls both a means to explore their sexuality and a way to express themselves outside of social expectations.

Barbie’s body represents an age-old truth: Humans have fetishized the female body and its life-giving mysteries for millennia. Doll-like figurines seem to belong to every era and culture, beginning with Venus figurines. The oldest, the carved ivory “Venus of Hohle Fels” of Germany (circa 35,000 B.C.) is basically a pair of large breasts plus genitalia, with her head and legs just afterthoughts.

The significance of the Venus figurines’ heavily sexualized features has divided scholars. The statuettes could have been dolls, fertility symbols, mother goddess icons, Paleo-pornography or some combination thereof. It is likely that the figurines had multiple purposes, from the magical to the educational.

That is also true of the Egyptian “paddle doll” (2000 B.C.), carved from wood, with string beads for hair and paint indicating the female genitalia. It is now believed that these dolls, once thought of as mere toys, also symbolized life-giving forces in Pharaonic funeral rituals.

By 200 B.C., dolls with flexible joints appeared, as Roman girls discovered the satisfaction of manipulating little limbs into bits of material. Clothed dolls provided a new way for girls to relate to the world.

Girls of Japan’s Heian era (A.D. 794-1185)—whose lives were severely circumscribed—would dress long-haired hina dolls in the elaborate fashions of the day. Behind this seemingly frivolous pursuit was a serious psychological purpose: The hina doll bridged reality and the freedom of the imagination. Not surprisingly, the strictly brought-upQueen Victoria amassed quite a collection of beloved dress-up dolls.

The truth about all dolls, not just Barbie, is that they have been a timeless conduit for the development of our unconscious. An 11½-inch piece of plastic that often ends up lost in a toy chest, naked and headless, Barbie will no doubt outlive us all.

Next ArticleWSJ Historically Speaking: Much Ado About Stuffing: A History