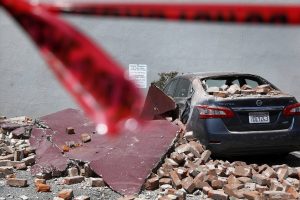 The Big One is looking a little more likely these days. Since the California earthquake of 1857, tectonic plates along the San Andreas Fault are thought to have shifted by as much as 26 feet. Only last year, scientists raised the chances of a quake in California of magnitude 8.0 or greater in the next 30 years to 7% from 4.7%. Unfortunately, for all the sophisticated science behind this prediction, nobody knows whether this means devastation tomorrow or many decades from now.

The mystery surrounding earthquakes—the fact that they can strike at any time without warning—has puzzled humans for eons. The ancient Greeks believed that they were signals of the god Poseidon’s displeasure. Judeo-Christian cultures considered them divine punishment for individual or collective sin. Other societies avoided the blame game in favor of supernatural phenomena. One popular explanation involved giant animals moving underneath the Earth: a frog in Chinese stories, a catfish in Japan, a turtle according to some Native American tribes.

The common element of quakes throughout history has been their power to remake more than just the physical landscape. In Greece, a temblor in 464 B.C. fatally undermined Sparta’s oligarchic system. Japan fell under the spell of the great Buddhist reformer Nichiren (1222-1282) after the Kamakura quake of 1257. Chinese architecture adopted new forms—avoiding more dangerous materials like stone—after the Shaanxi earthquake of 1556, believed to be the deadliest on record.

In Europe, the cataclysmic Lisbon earthquake of 1755 altered the course of the Enlightenment. The quake happened on All Saints’ Day, Nov. 1, while much of the 275,000-strong population was at church. The disaster killed about 60,000 and destroyed two-thirds of Lisbon, then the fourth-largest city in Europe.

Long before the earthquake, the 17th-century philosopher Gottfried Wilhelm Leibniz had argued that every apparent good and ill was, in fact, part of God’s plan. As the poet Alexander Pope put it in “An Essay on Man” (1733-34), “One truth is clear, Whatever is, is Right.” After Lisbon, such dogmatic optimism rang hollow. Into the philosophical void stepped three greats of the Enlightenment: Voltaire, Jean-Jacques Rousseau and Immanuel Kant.

Voltaire attacked religion in his poem “An Inquiry into the Maxim ‘Whatever Is, Is Right,’ ” arguing that faith was mere self-deception. Bad things, he insisted, simply happen: “Leibniz can’t tell me from what secret cause…Lasting disorders, woes that never end / With our vain pleasures real sufferings blend.”

In a letter to Voltaire, Rousseau countered his unrelenting pessimism with a bold new argument for human agency. Rousseau pointed out that Lisbon’s earthquake had been unnecessarily deadly because of poor building decisions. The right approach, the Geneva philosopher argued, required man to realign his relationship with nature.

Voltaire responded with the tragicomic novel “Candide” (1759). Its long-suffering hero, who survives the Lisbon quake only to fall victim to the Inquisition, asks, “If this is the best of all possible worlds, what are the others?”

Kant took a different tack, asking not why but how earthquakes occur. By championing the role of scientific reason in works including “On the Causes of the Terrestrial Convulsions” (1756), he redefined the limits of human inquiry to exclude the mystical, the magical and the superstitious.

In such creativity lies modern society’s best hope for surviving the Big One. Earthquakes are the scourge of mankind, claimed Scottish moral philosopher and economist Adam Smith in “The Theory of Moral Sentiments” (1759), but also the making of humanity. When disaster strikes, he argued, “It is a stronger power…which exerts itself upon such occasions. It is reason, principle, conscience…the man within.”

Next Article"Netflix Review: ‘The Ascent of Woman’ — Making Women Part of the Narrative" - Women's Voices for Change