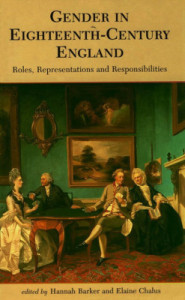 The Sexes have now little other apparent Distinction, beyond that of Person and Dress: Their peculiar and characteristic Manners are confounded and lost: The one Sex having advanced into Boldness. As the other have sunk into Effeminacy. 1
(John Brown, 1757)

Women must be understood …… in terms of relationship – with other women, and with men …..2
(Michelle Zimbalist Rosaldo, 1980)

For John Brown, England’s dismal performance at the beginning of the Seven Years’ War was the result of a deterioration in national character that he attributed, at least in part, to changes in manner and sexes. Like other eighteenth-century moralists and conduct-book writers who attempted to coax, cajole or chastise their readers into complying with idealized notions of masculinity and femininity, he believed that clearly defined gender roles were central to the stability of English society, and by extension, to England’s status as a world power.

In general, eighteenth-century prescriptive texts argued that men and women were ‘naturally’ different, and that these differences not only shaped their characters but suited each sex to specific activities and roles in society. Authors mustered powerful religious, philosophical and scientific arguments to explain, rationalize and legitimize implicit and explicit inequalities between the sexes. While men and masculinity were occasionally the subjects of such texts, the overwhelming majority of this literature was aimed at women, who were, by nature, considered to be in need of closer supervision.

Next ArticleGeorgiana, Duchess of Devonshire by Amanda Foreman