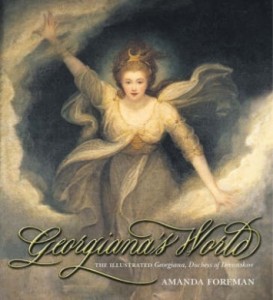 As one of the most flamboyant and influential women of the late 18th century, Georgiana, Duchess of Devonshire was an icon of her time. Born Lady Georgiana Spencer, she married the fifth Duke of Devonshire in 1774; within a short space of time she had become the undisputed queen of fashionable society, adored by the Prince Regent, an intimate of Marie-Antoinette, an influential Whig hostess and a darling of the common people. Yet for all her aura of public glamour, Georgiana’s personal life was fraught with suffering brought on by her compulsive gambling, which led to insurmountable debts and ignominy, and her search for love, which caused misery and exile.

“Georgiana’s World” is the illustrated version of Amanda Foreman’s bestselling biography, “Georgiana, Duchess of Devonshire”, and brings a fresh perspective to her life and times. Filled with images of the people and places she actually knew, a series of special features explore such aspects of 18th-century life as aristocracy.