It is that time of year again, when the table is laden, the candles are lit, and the good china comes out of cupboard. The rest of the time it sits gathering dust, which is silly because almost all modern china, even the most expensive kind, is now dishwasher safe. In any case, porcelain is stronger than it appears. The first Western imports of Chinese porcelain were able to survive journeys that had taken many months and covered thousands of miles.

Europe’s love affair with china began in 1499 when the Portuguese explorer Vasco da Gama brought home a dozen pieces for his patron, Dom Manuel I. The king of Portugal fell in love with this strange ceramic that had the strength of ordinary pottery but the luster and translucency of a seashell. That shell-like quality inspired Marco Polo in the 13th century to dub the material “porcellana,” the Italian slang for cowrie shell. Dom Manuel was the first monarch to commission a set of china from China. When it arrived in 1520, at least one piece had been painted with his coat of arms upside down. 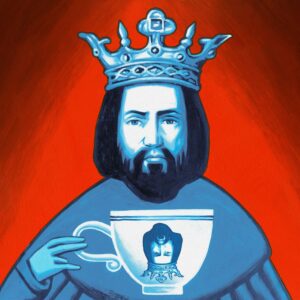 As demand grew, Chinese artists in Jingdezhen, eastern China, where the porcelain factories had been concentrated since the 10th century, became more expert at catering to European tastes. Centuries earlier, the Chinese had developed blue-and-white porcelain in response to Middle Eastern taste and demand. The Ming emperors fell in love with it, and the Chinese appropriated the Arabesque designs but added peonies, dragons, herons and phoenixes to the repertoire.

Chinese porcelain was called “white gold” and priced accordingly. Try as they might, would-be European competitors couldn’t replicate its formula, even once they knew that kaolin clay, which China has in abundance, was an essential ingredient. Alchemists working for Frederick the Great, the king of Prussia, made 30,000 failed attempts.

Augustus II, Elector of Saxony, forced a particularly talented young alchemist named Johann Friedrich Bottger to labor under house arrest until he devised what is generally thought to be the approximate European recipe in 1708. Two years later, Augustus founded the famous Meissen factory, near Dresden. Within three decades, industrial espionage on a rampant scale had enabled rival china factories to proliferate across Europe.

The power of porcelain went beyond its beauty. Gifts of exquisite china sets were a popular tool of royal diplomacy. The British potter Josiah Wedgwood made an anti-slavery medallion in 1787, featuring an African man in chains with the words, ‘Am I not a man and brother?’ on top. The image became an international symbol of protest, appearing on everything from plates to cuff links.

In the U.S., presidents would come to be associated with specific china patterns. George Washington initiated this tradition by purchasing from China a 302-piece dinner service decorated with the emblem of the Society of Cincinnati, founded by French and American officers who had fought together in the Revolutionary War.

Foreign exports dominated the U.S. fine china market until the late 19th century, when homegrown rivals Willard Pickard in Wisconsin and William Scott Lenox in New Jersey appeared on the scene. In 1918 President Woodrow Wilson commissioned Lenox China to manufacture the first set of American-made china for the White House. Pickard made the latest, for the Obama White House, in 2015. Some traditions are worth saving.

Next ArticleCBS News: Prince Harry accuses his brother William of attacking him in new memoir