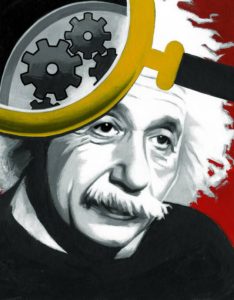 “Genius,” a new National Geographic miniseries on Albert Einstein starring Geoffrey Rush, tries to peel back the great physicist’s eccentric public persona and examine the human being underneath, warts and all. But even if we could discover everything about Einstein’s life and character, would that tell us anything about the nature of genius?

People have been puzzling over the concept for more than 2,000 years, as Darrin M. McMahon points out in his comprehensive history of genius, “Divine Fury.” In classical antiquity, genius wasn’t considered a talent or the result of effort but a divine spirit. The ancient Greeks believed that every individual was born with a daimon, an innate spiritual power bestowed by the gods that guided a person’s actions and ultimately decided his fate. The Romans shared this basic belief in a heavenly spirit that resides in us.

But the classical world also saw a dark side in this divine inspiration, especially in the case of extraordinary individuals. In “On Peace of Mind,” the philosopher Seneca the Younger (4 B.C.-A.D. 65), echoing Greek thought, said that “no great genius has existed without a touch of madness.”

The classical conception of genius survived to the end of the Renaissance. Shakespeare still used the word genius in the sense of guiding spirit, as in his play “Troilus and Cressida,” where the warrior Troilus grimly bids farewell to his lover, whom he may never see again: ‘Hark! You are call’d: some say the Genius so cries ‘come’ to him that instantly must die.”

The Enlightenment tried to sweep away supernatural or mystical explanations for genius but remained fascinated by its deeper mysteries. The poet John Dryden (1631-1700) wrote, “How to improve [genius], many books can teach us; how to obtain it, none; that nothing can be done without it all agree….” A century later, the philosopher Immanuel Kant, in “The Critique of Judgment,” was no closer to an answer than Dryden, but nevertheless argued that genius had to be subject to the same laws of causality as everything else.

Actors Geoffrey Rush and Johnny Flynn stop by the WSJ Café and reveal the secrets of playing Albert Einstein in the National Geographic series ‘Genius.’
During the 19th century the idea of genius as a form of madness became fashionable again. Among the Romantic poets, cool reflection about the nature of genius was replaced by frenzy, rapture and acting out, preferably in some tragic or self-destructive way. Lord Byron’s widely rumored affair with his half-sister and Samuel Taylor Coleridge’s addiction to opium only encouraged such behavior.

Unfortunately, the Victorian glamorization of genius gave way to an obsession with cultivating it. Francis Galton (1822-1911), a cousin of Charles Darwin, wrote ‘Hereditary Genius: An Inquiry Into Its Laws and Consequences,” in which he argued that genius could be “bred” into the human race. The work helped inspire the eugenics movement, the idea of using controlled breeding to improve humanity. In turn, the Nazis seized on eugenics for their project to create and spread a master race.

Today we are still no closer to understanding genius. In the 20th century, people thought that IQ tests would identify the gift. But a long-term study of more than 1,500 children with “genius” IQs, started in 1921 by the educational psychologist Lewis M. Terman, revealed something surprising: While most participants ended up successful, none of them were hailed as geniuses in their fields.

Next ArticleDebate: 'Why history?' at Newcastle University