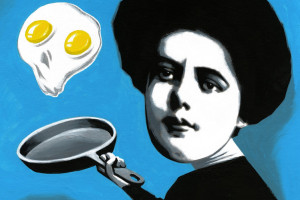 The German poet Heinrich Heine was in France on March 29, 1832, when cholera first appeared in Paris. He described the outbreak in a letter: “A masked ball was in progress…Suddenly, the gayest of the harlequins collapsed, cold in the limbs, and, underneath his mask, ‘violet-blue’ in the face. Laughter died out, dancing ceased, and in a short while carriage-loads of people were hurried from the redoute to the Hotel Dieu. Soon the public halls were filled with dead bodies, sewed in sacks for want of coffins.”

Not realizing that cholera is spread by water infected with human sewage, the French tried any number of futile remedies. One magazine advised, “The best tea for protecting yourself against cholera is champagne.” By the end of the outbreak, some 20,000 Parisians had died, of a population of 650,000.

Cholera reached New York three months later, on June 24. Many Americans had seen cholera as God’s punishment on Europeans for their filthy habits and immoral behavior. Their surprise at the virulence of the disease was matched only by their terror. New Yorkers fled the city, making Cornelius Vanderbilt, the owner of the Hudson River steam line, rich in the process. The refugees took the cholera bacteria with them, gradually dispersing it all over the U.S. The disease continued unchecked until 1854, when John Snow, a London doctor, discovered that it was transmitted via water.

Ironically, ignorance of the way people catch yellow fever saved thousands of American lives during the Civil War. In 1864, a Confederate doctor named Luke P. Blackburn went to Bermuda, ostensibly to treat a yellow fever outbreak. In fact, he was there to collect the clothes and blankets of infected patients and use them as bioweapons against Northern civilians. He planned to put the materials into trunks and ship them to auction houses in the U.S. But Blackburn was unaware of one important fact: Yellow fever is spread by mosquitoes, not human contact or old clothes. The plot failed, and after the war, a chastened Blackburn went on to lead a far less dubious life, becoming governor of Kentucky in 1879.

Half a century later, Mary Mallon inadvertently revealed typhoid’s deadliest secret after she infected more than 53 people without showing any signs of the illness herself. Typhoid Mary, as she became known, led a sad, lonely life in quarantine, but the discovery that carriers can be asymptomatic was a major medical advance. We can thank Mary for the food-sanitation laws on hand-washing. As Benjamin Franklin once said, “An ounce of prevention is worth a pound of cure.”

Next ArticleThe Sunday Times: Here's the first crack in the shield around America’s bad teachers