Wind-catching towers and human-powered rotary fans were just some of the devices invented to fight the heat. 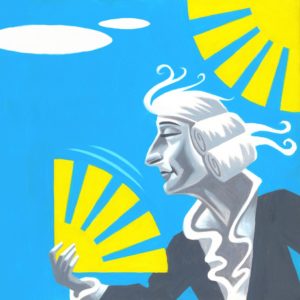 What would we do without our air conditioning? Given the number of rolling blackouts and brownouts that happen across the U.S. each summer, that’s not exactly a rhetorical question.

Fortunately, our ancestors knew a thing or two about staying cool even without electricity. The ancient Egyptians developed the earliest known technique: Evaporative cooling involved hanging wet reeds in front of windows, so that the air cooled as the water evaporated.

The Romans, the greatest engineers of the ancient world, had more sophisticated methods. By 312 B.C. they were piping fresh water into Rome via underground pipes and aqueducts, enabling the rich to cool and heat their houses using cold water pipes embedded in the walls and hot water pipes under the floor.

Nor were the Romans alone in developing clever domestic architecture to provide relief in hot climes. In the Middle East, architects constructed buildings with “wind catchers”—tall, four-windowed towers that funneled cool breezes down to ground level and allowed hot air to escape. These had the advantage of working on their own, without human labor. The Chinese had started using rotary fans as early as the second century, but they required a dedicated army of slaves to keep them moving. The addition of hydraulic power during the Song era, 960-1279, alleviated but didn’t end the manpower issue.

There had been no significant improvements in air conditioning designs for almost a thousand years when, in 1734, British politicians turned to Dr. John Theophilus Desaguliers, a former assistant to Isaac Newton, and begged him to find a way of cooling the overheated House of Commons. Desaguliers designed a marvelous Rube Goldberg-like system that used all three traditional methods: wind towers, pipes and rotary fans. It actually worked, so long as there was someone to crank the handle at all times.

But the machinery wore out in the late 1760s, leaving politicians as hot and bothered as ever. In desperation, the House invited Benjamin Franklin and other leading scientists to design something new. Their final scheme turned out to be no better than Desaguliers’s and required not one but two men to keep the system working.

The real breakthrough occurred in 1841, after the British engineer David Boswell Reid figured out how to control room temperature using steam power. St. George’s Hall in Liverpool is widely considered to be the world’s first air-conditioned building.

Indeed, Reid is one of history’s unsung heroes. His system worked so well that he was invited to install his pipe and ventilation design in hospitals and public buildings around the world. He was working in the U.S. at the start of the Civil War and was appointed inspector of military hospitals. Unfortunately, he died suddenly in 1863, leaving his proposed improvements to gather dust.

The chief problem with Reid’s system was that steam power was about to be overtaken by electricity. When President James Garfield was shot by an assassin in the summer of 1881, naval engineers attempted to keep him cool by using electric fans to blow air over blocks of ice. Two decades later, Willis Haviland Carrier invented the first all-electric air conditioning unit. Architects and construction engineers have been designing around it ever since.

Fears for our power grid may be exaggerated, but it’s good to know that if the unthinkable were to happen and we lost our air conditioners, history can offer us some cool solutions.