The ancient Babylonians and Egyptians knew about soap, but daily washing didn’t become popular until the 19th century.

The Wall Street Journal, Oct. 4, 2019
As the mother of five teenagers, I have a keen appreciation of soap—especially when it’s actually used. Those little colored bars—or more frequently nowadays, dollops of gel—represent one of the triumphs of civilization.

Adolescents aside, human beings like to be clean, and any product made of fats or oils, alkaline salts and water will help them to stay that way. The Babylonians knew how to make soap as early as 2800 B.C., although it was probably too caustic for washing anything except hair and textiles. The Ebers Papyrus, an ancient Egyptian medical document from 1550 B.C., suggests that the Egyptians used soap only for treating skin ailments. 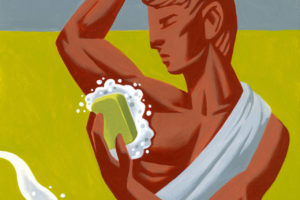 The Greeks and Romans also avoided washing with harsh soaps, until Julius Caesar’s conquest of Gaul in 58 B.C. introduced them to a softer Celtic formula. Aretaeus of Cappadocia, a 1st century A.D. Greek physician, wrote that “those alkaline substances made into balls” are a “very excellent thing to cleanse the body in the bath.”

Following Rome’s collapse in the 5th century, the centers of soap-making moved to India, Africa and the Middle East. In Europe, soap suffered from being associated with ancient paganism. In the 14th century, Crusaders returning from the Middle East brought back with them a taste for washing with soap and water, but not in sufficient numbers to slow the spread of plague.

Soap began to achieve wider acceptance in Europe during the Renaissance, though geography still played a role: Southern countries had the advantage of making soap out of natural oils and perfumes, while the colder north had to make do with animal fats and whale blubber. Soap’s growing popularity also attracted the attention of revenue-hungry governments. In 1632, in one of the earliest documented cases of crony capitalism, King Charles I of England granted a group of London soapmakers a 14-year monopoly in exchange for annual payments of 4 pounds per ton sold.

Soap remained a luxury item, however, until scientific advances during the age of the Enlightenment made large-scale production possible: In 1790, the French chemist Nicholas Leblanc discovered how to make alkali from common salt. The saying “cleanliness is next to godliness”—credited to John Wesley, the founder of Methodism—was a great piece of free advertising, but it was soap’s role in modern warfare that had a bigger impact on society. During the Crimean War in Europe and the Civil War in the U.S., high death tolls from unsanitary conditions led to new requirements that soldiers use soap every day.

In the late 19th century, soap manufacturers helped to jump-start the advertising industry with their use of catchy poems and famous artworks as marketing tools. British and American soapmakers were ahead of their time in other ways, too: Lever (now Unilever) built housing for its workers, while Procter and Gamble pioneered the practice of profit-sharing.

And it was Procter and Gamble that made soap the basis for one of the most influential cultural institutions of the last century. Having read reports that women would like to be entertained while doing housework, the company decided it would sponsor the production of daytime radio domestic dramas. Thus began the first soap opera, “Ma Perkins,” a 15-minute tear-laden serial that ran from 1933 until 1960—and created a new form of storytelling.