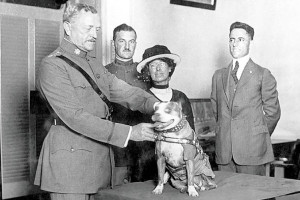 For most of history, humans blithely ignored that debt. There is, for example, the Homeric story of Odysseus coming home after 20 years to find that no one had bothered to care for his faithful dog, Argos. And in Shakespeare’s “A Midsummer Night’s Dream,” we find the lovesick Helena crying to Demetrius, “Use me but as your spaniel—spurn me, strike me, / Neglect me, lose me,” all of which rather aptly sums up the Elizabethan attitude to Man’s Best Friend.

There were exceptions to this disregard. Roman historians never failed to praise the sacred geese in the temple of Juno, whose squawks saved Rome from a surprise attack by the Gauls in 390 B.C. Greek philosophers so admired the moral purity of animals that students of Socrates founded Cynicism (coined from kynikos, meaning “doglike”) to encourage a return to nature. And early Islamic teachings have a special mention for animals doing God’s work: Mahmud, a Yemeni war elephant, is credited with saving the Kaaba shrine in Mecca in A.D. 570 by his miraculous refusal to lead an invading army across the border.

As a cause, however, animal welfare wasn’t fashionable until the 18th century. It took more than a century of social campaigning for the first animal-protection society, the Royal Society for the Prevention of Cruelty to Animals, to be founded in London in 1824.

The U.S. Civil War proved to be a turning point for American attitudes to animals, not only because it resulted in the death of more than a million mules and horses but also because it made famous such mascots as Old Abe, a bald eagle belonging to the 8th Regiment, Wisconsin Volunteer Infantry. The carnage of World War I did still more to shake people out of their complacency: Eight million horses died alongside countless mules, donkeys, camels, elephants, pigeons and dogs.

The authorities of the time recognized that duty and devotion go both ways. A dog named Stubby survived four offensives and 17 battles in France and was ultimately promoted to sergeant—the first canine ever given rank in the U.S. Army. Cher Ami, a carrier pigeon belonging to the U.S. Signal Corps, helped to rescue 194 stranded men and was awarded the French croix de guerre. Warrior, a war horse beloved by the Canadian cavalry, was so courageous that he received his own obituary in the London Times.

The tradition of rewarding bravery and loyalty lives on today with the PDSA Dickin Medal, an international prize for the animal world. The last American recipients were Salty and Roselle, two Labrador guide dogs who safely led their owners from the World Trade Center on 9/11.

Next ArticlePodcast - Intelligence Squared: What Next for Feminism?