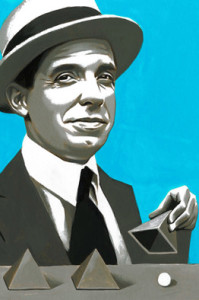 Confidence also sustained two of history’s greatest female swindlers. In both cases, the public was confident that a woman could never perpetrate such a diabolically clever scheme. The more audacious of the two, Thérèse Humbert, convinced the French establishment during the late 19th century that she stood in line to inherit 120 million francs from a grateful American businessman whose life she had saved in a train incident. Her story gained credence from the fact that her father-in-law was then France’s minister of justice. Throughout the 1880s and ’90s, she borrowed millions from credulous lenders. In return, Humbert promised a share of the will plus interest. The few who asked to see the will were shown a locked strongbox that supposedly contained the precious document. In 1902, when a French court finally ordered the strongbox opened, officials found some bits of paper, an Italian penny and a metal button.

Humbert is said to have eventually fled to the U.S. But the country was still reeling from the Ladies’ Deposit scandal and therefore hardly a welcoming place for someone like her. While Humbert was fleecing the French, a 53-year-old widow named Sarah Howe had done the same to wealthy New England women. In 1879, Howe created a fund for female investors. It had strict criteria for entry, and only the “lucky” were allowed to invest. In an age of rampant banking discrimination against women, Howe quickly amassed a fortune from hundreds, if not thousands, of female victims. She ran a classic Ponzi scheme decades before Ponzi, and not a dollar was left when the day of reckoning came.

The 18th-century poet Alexander Pope wrote scathingly of the kind of herd mentality that helps sustain dubious investment schemes: “How goes the Stock, becomes the gen’ral Cry. / Rather than fail we’ll at Nine Hundred Buy.” He was speaking from experience, having lost a substantial sum in the 1720 South Sea bubble. The public’s confidence in the South Sea Company—a joint-stock corporation that agreed to convert the national debt into company shares—stemmed from the fact that it was backed by the British government. The stock price soared even though no one could explain exactly how the scheme was meant to work. On June 24, 1720, a single share was worth a stupendous £1,050. Within six months, it had lost 90% of its value. Among the thousands of victims was Sir Isaac Newton, the renowned scientist and master of the mint. “I can calculate the motions of the heavenly bodies,” he wrote, “but not the madness of people.”

Next ArticleThe Sunday Times: Stay silent and soon Amazon will be telling the world what it can read