The Sunday Times – Special relationship: US mourns the Queen as it would a president

My phone started ringing at 7am New York time on Thursday. The news about the Queen’s health had reached the networks and they were calling everyone in. By 9am I was in the CBS newsroom and so began a long day that has not yet ended.

To say that Americans are reacting strongly to the death of the Queen hardly does justice to the immense coverage it has received. Not since the funeral of Pope John Paul II in 2005 has an international figure been given the kind of treatment normally reserved for departed presidents. 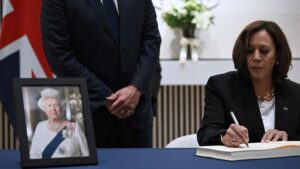 Kamala Harris, the US vice-president, signs the condolence book at the British embassy in Washington

That includes the American tendency to start the criticising long before any European outlet would consider it seemly to do so. As any psychologist will tell you, extreme love and hate are two sides of the same coin.

In the studio I was struck by the comment of a “lifestyle” journalist who remarked that Elizabeth II had been the star of a reality TV family, years before the concept had been invented. “Is that why we are so obsessed with the Queen and the monarchy?” mused the anchor before proceeding to display a level of knowledge about the Queen that would put a royal correspondent to shame.

On Thursday night New York was a blinking skyline of mauve, purple and lavender tributes, led by the Empire State Building in silver and purple. It was almost exactly 65 years ago in October 1957 that the Queen had gone to the top of the building to see the view. Cities that the Queen had never visited also paid their respects. Las Vegas illuminated its High Roller observation wheel — the world’s second tallest — a neon purple.

American sport paused briefly, too. On Thursday a minute’s silence was observed and an image of the Queen projected on to large screens before play at the NFL season opener in Los Angeles, at the US Open tennis tournament and at the baseball game in Yankee stadium.

Not everyone was in mourning though. With a breathtaking lack of decorum, The New York Times rushed out an opinion piece that accused the Queen of being a participant in Britain’s cover-up of its colonial crimes. This was tepid compared with some outbursts on social media. A linguistics professor at Carnegie Mellon University in Pennsylvania tweeted her hope that the Queen’s final hours were “excruciating”.

America’s relationship with the monarchy has always been complicated. After victory in the War of Independence George Washington angrily dismissed suggestions that he become king of the new United States. But there were still officers in his own army who thought that a monarchy would be good for the country. It was an idea that never went away.

Britain was one of the first countries to recognise the Republic of Texas in 1836, and Texans repaid the compliment by openly flirting with the idea of joining the British Empire. At the start of the American Civil War in 1861, the British consulate in Charleston reported high-level discussions on whether it would aid the Confederacy to invite a younger member of the royal family to become king once the South had achieved independence.

About the same time the 19th-century journalist Thomas Nichols asked “Why does America hate England?”, this anglophobic nation gave the Prince of Wales, the future Edward VII, the biggest welcome yet shown to a foreign dignitary.

Like a cross between a Greek tragedy and a French farce, the drama of Anglo-American relations during the 19th century mainly consisted of young America alternating between vying for Britain’s good opinion and wanting to destroy her.

The Queen had the good fortune to come to the throne after the US had passed through this awkward adolescent phase. Aged 25, she was stepping into a role that had played an essential part in shaping American identity. Not quite mother figure, certainly not hated stepmother, and yet familial, maternal, and in the origin-story she represented, eternal.

It is no wonder that during her first state visit in 1957, a million people lined the roads to watch her arrive in Washington. There’s no escaping family. Still, family, like biology, is not destiny. It was her choice to embrace the past as proof that the two countries had put it behind them, like mature adults.

That first state visit took place after a crack in Anglo-American relations caused by Suez. Much depended, therefore, on the Queen’s four-night stay at the White House. It wasn’t merely a matter of repairing relations with President Eisenhower, she also needed to charm the public — which she did, by among other things, showing herself to be interested in the things that interested them, like watching a football game.

The recovery of good relations was a testament to the Queen’s personal touch with US presidents. In 1976, at a state dinner in Washington, she rather boldly referred to the British burning of the White House, to add: “But these early quarrels are long buried. What is more important is that our shared language, traditions and history have given us a common vision of what is right and just.”

Yet this mutual heritage alone was not enough to bind the nations, she came to believe. Active reminders and a stroking of the ego of whomever occupied the White House were equally important.

The success of this policy was borne out by what did not happen during the Falklands conflict in 1982. Despite great reason to avoid supporting Britain against Argentina, the US proved to be a reliable ally. Much has been made of the role played by Margaret Thatcher’s relationship with Ronald Reagan. But the Queen’s adept handling of Nancy Reagan during the latter’s visit for the royal wedding the year before had helped to lay the groundwork. After the wedding, the Queen issued a rare private invitation to the Reagans to stay with her at Windsor Castle the following year. A small thing, perhaps, and yet personal touches can decide the fate of a nation.

Before President Obama’s first visit to London in 2009 it was reported that he had little interest in cultivating a special relationship, but Operation Obama proved the most successful charm offensive in the Queen’s history of diplomacy.

Perhaps it was the moment that the Queen and Michelle Obama put their arms around each other, or the amount of private time that the Queen and Prince Philip gave to the Obamas. Either way, by the end of Obama’s two terms relations between the White House and Buckingham Palace had never been better.

The reason Americans are in shock is not because, or merely because, the Queen was famous, or that her family make for good copy; she held up a mirror through which this nation saw a different self, perhaps its best self that only a mother sees.

Next ArticleThe Mail on Sunday: No miniskirts. No railing about being a working mother.