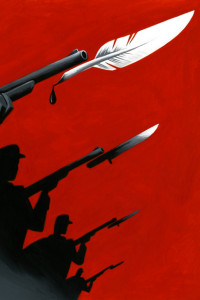 Many watershed events fit Emerson’s evocation. When Julius Caesar crossed the Rubicon River on Jan. 10, 49 B.C., he set in motion the rise of the Roman Empire. When Christopher Columbus reached the island he called San Salvador on Oct. 12, 1492, he brought the Old and New Worlds together, with cataclysmic consequences. In our own time, after President Harry Truman’s decision to drop an atomic bomb on Hiroshima on Aug. 6, 1945, the existence of humankind became conditional.

But that is not the full story or even the full meaning of the “Concord Hymn.” At its heart lie the nameless “embattled farmers” who gave their lives to the cause of liberty. The question for Emerson was how to memorialize their selfless acts when their identities were lost to history. In part, he found the answer in his own act of writing. Memory won’t last, he acknowledged, “When, like our sires, our sons are gone.” He could only hope that the monument commemorating the battle, “Time and Nature gently spare.” Instead, Emerson put his faith in the ineffable “Spirit, that made those heroes dare/ To die.” It had inspired the farmers as it now inspired him—and would, he believed, have the same effect on future generations who read his poem.

On the eve of the Civil War, Henry Wadsworth Longfellow revisited the events surrounding the Battle of Lexington. Like Emerson, he was deeply convinced of the transformative power of poetry. Choosing the night before the battle as his subject, Longfellow offered a similar lament about the fragility of memory: “Of the midnight ride of Paul Revere, On the eighteenth of April, in Seventy-five;/ Hardly a man is now alive/ Who remembers that famous day and year.” He also revisited the nameless farmers, who “gave them ball for ball.”

But Longfellow was recalling the spirit “borne on the night-wind of the Past” not as a celebration but a warning. The Union had been brought into existence by a single shot; the message in “Paul Revere’s Ride” was that a similar event could trigger its destruction. Longfellow’s poem could be described as a prayer, an invocation that “The people will waken and listen to hear…the midnight message of Paul Revere.”

It isn’t fashionable to write patriotic poetry nowadays. But if the spirit of Lexington lies sleeping in the U.S., it is very much awake in other parts of the world—as in Ukraine, where a vulnerable, embattled young democracy is making a gallant stand of its own. April 19, 1775, was a day of hope, of bloodshed and ideas made real. Emerson and Longfellow didn’t want us to forget.