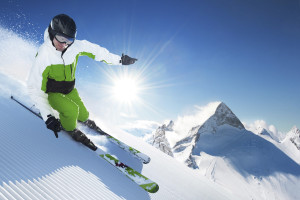 Although Northern Europe once again dominated the medal table recently at the 2015 FIS World Alpine Ski Championships in Colorado, the list of competing countries also included such snow-­‐deprived countries as Haiti, Israel and Jamaica.

Not only has skiing grown popular in countries more usually associated with beach barbecues, historians of the sport have now discovered that its roots are far more diverse than originally imagined.

The earliest known ski fragment—unearthed near Lake Sindor, some 745 miles northeast of Moscow—dates roughly to 6,000 B.C. In Norway, Sweden and Finland, archaeologists have found rock carvings known as petroglyphs that depict hunters on skis chasing wild animals. One drawing found in 2001 in Nord-Trøndelag, Norway, often referred to as Bola Man, is thought to be about 5,500 years old.

But similar petroglyphs have also been uncovered on the other side of the world, in the Altai Mountains of northwestern China. Their ages are disputed, with estimates varying between 3,000 and 5,000 years old. But there is no disagreement about where the first literary description of skiing appears. One of China’s oldest texts, “Shan Hai Jing” (“The Classic of Mountains and Seas”), compiled and edited during the Han Dynasty (206 B.C.-220 A.D.), states that “the people of the Dingling nationality living in the Aletai mountains” sometimes wore “the ‘horns of a goat’—a kind of knee-high fur boot under which is a wooden board with a hoof-shaped front tip.” Today, this early form of skiing remains a part of Altai culture, and hunters still use the ancient method of a single ski pole, called a taiyak.

The art of skiing wields cultural significance far beyond China. In Russia—as befits a country that saw off Napoleon by deploying soldiers on skis—skiing signifies military power. In “The History of Pugachev” by the 19th-century novelist and poet Alexander Pushkin, the final defeat of the famous Pugachev rebellion against Catherine the Great is ascribed to government troops who, “skiing fast on top of the deep snow, occupied all vantage points.”

For the British, skiing exemplifies the hearty, derring-do ethos that once caused bemused locals to classify all Englishmen abroad as mad.Sir Arthur Conan Doyle, who introduced Sherlock Holmes to the world in 1887, also—somewhat improbably—went on to popularize downhill skiing in Switzerland. Writing in McClure’s Magazine in 1895, Conan Doyle declared with uncanny prescience, “I am convinced that the time will come when hundreds of Englishmen will come to Switzerland for the skiing season. I believe I may be the first…but I am certain I will not by many thousands be the last.”

The French, for their part, see skiing as less of a sport and more of a metaphor for the human condition. For Jean-Paul Sartre, in “Being and Nothingness” (1943), the snow reminds him of the body of a naked woman. The piste represents “pure being and exteriority,” while skiing “symbolizes the activity of consciousness…I have a sense that this is my snowfield. What I want to appropriate is the absolute being of the in-itself and thus become the real.”

Naturally, for Ernest Hemingway, French pontificating on naked women and consciousness entirely missed the point of skiing, which actually symbolizes the American tragedy of the emasculated male. In his 1924 short story “Cross-Country Snow,” two young friends contemplate their last ski run, each knowing that the freedom of the piste is an illusion; their futures are already mortgaged to conformity and domestication. Hemingway makes the ineffable tangible through the immortal line, “That’s the way it is.”