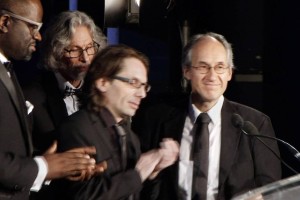 On balance it would have been awkward if the boycotters of the annual awards dinner of PEN American Center had changed their minds and attended on Tuesday night. At the very least their presence at the literary gathering might have been an unnecessary distraction. At worst it could have been taken as an insult to the memories of the 12 members of the satirical French publication Charlie Hebdo who died on Jan. 7 while exercising their right to free speech.

The heartfelt standing ovation for Gerard Biard and Jean-Baptiste Thoret—who accepted the Freedom of Expression Courage award on behalf of the magazine—had its own eloquence. Unusually, the many writers in the room didn’t need to say anything to make themselves heard. Simply being at the dinner was a statement, a Rubicon moment for those who believe that universal human rights is a cause worth dying for. Just as boycotting the awards has become the rallying event for those who believe that it comes second to other considerations.

If rational argument were a numbers game, there would be no need to continue the discussion about whether PEN behaved correctly in honoring Charlie Hebdo. In the days since 204 writers including Peter Carey, Joyce Carol Oates and Francine Prose—roughly 5% of the membership—signed a letter outlining their objections to the award, criticism of their stance has been unending. From the liberal Nation to the conservative Weekly Standard, the outrage from the majority of the writing community has been unequivocal: Freedom of speech, protected by the First Amendment, is a nonnegotiable right.

After the boycott began, it was met with a thorough demolishing of the claims by its supporters, especially the charge that Charlie Hebdo is racist. Whether through ignorance or malice, this self-appointed committee of public safety insinuated that the magazine’s writers had provoked their own murder by attacking Islam in general, and victimizing French Muslims in particular. Charlie Hebdo’s brand of humor, we were told, “intended to cause further humiliation and suffering.”

That calumny has now been exposed as a lie in point-by-point repudiations by some of the most respected voices in France, including the author Bernard-Henri Lévy andDominique Sopo, the head of SOS-Racisme. The facts are there for all to see, such as: the Hebdo staffers were murdered while planning a conference on antiracism, and only seven of 523 covers for the magazine in the past decade touched on Islam. The protesters can no longer peddle the libel that Charlie Hebdo is a modern-day equivalent of a Nazi propaganda sheet, as several have, including Deborah Eisenberg, whose letter to PEN asked whether it would next be “giving the award retroactively to Julius Streicher’s Der Stürmer.”

Yet dragging Nazism into the discussion is useful in one respect. While denouncing the PEN boycott, Mr. Lévy referred to the “deplorable Congress of Dubrovnik of 1933, at which the predecessors of Peter Carey refused to take a position against the book-burnings in Germany.” The Dubrovnik conference, in what was then Yugoslavia, took place on May 10, 82 years ago.

The PEN president at the time, H.G. Wells, tried to maintain neutrality between those who wanted to speak out against Nazism and those who argued that politics had no place in a literary organization. His aim was defeated by the sole American delegate, Henry Seidel Canby, who forced through a resolution crafted by PEN America that restated PEN’s core mission as an advocacy organization.

Because of Canby’s courageous stand, the exiled German playwright Ernst Toller was able to make his own speech the following day—an impassioned plea on behalf of writers suffering Nazi persecution. The German delegation and others walked out. Toller’s speech persuaded the remaining delegates that the organization had to remold itself into the one we know today. Toller, who committed suicide in New York in 1939, declared: “Insanity dominates our age, and barbarity drives humans . . . the voice of humanity will only become powerful if it serves a larger political agenda.”

On Tuesday night, PEN President Andrew Solomon reaffirmed Toller’s position, saying: “PEN stands at the intersection between language and justice.” As the organization recovers from one of the ugliest episodes in its history, the Dubrovnik example offers clarity about what should happen next.

Like its 1933 counterpart, PEN today has decided it will not be neutral in the battle between free speech and the assassin’s veto. It may be that some members will never be fully comfortable with this decision. They should be let go without heartache or second-guessing. There are plenty of other organizations for which the dictates of personal taste, sensitivity and interpretation carry the day.

By awarding Charlie Hebdo the Freedom of Expression Courage prize, PEN has also shown its willingness to lead by example and from the front. That leadership is more important than ever.

If human-rights organizations, starting with PEN, fail to affirm the indivisibility of free speech, that failure will not lead to more peace and harmony in the world. It will lead to the reverse as vigilantes from all sides interpret such weakness as an invitation to impose their own order. The shootings in Copenhagen in February, and in Garland, Texas, last weekend—both involving Islamists targeting events they deemed insulting to their religion—are two examples of how some would like to see the “debate” unfold.

For those who believe in freedom of expression, the moment has come to make the choice between its defense or abandonment against a murderous movement that believes democratic values are subordinate to religious sensibilities. At the end of the evening on Tuesday, I spoke with Jean-Baptiste Thoret, Charlie Hebdo’s film critic. “There are just two options facing us all,” he said, “and we have to take a side.”

Next ArticleWSJ Historically Speaking: The Many Meanings of May Day