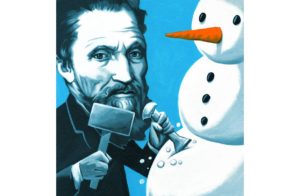 Some of the world’s most famous people have built notable snowmen—from Prince Albert, who built a 12-foot snowman for his wife, Queen Victoria, to Michelangelo, who made one for the Medicis. In 1494, the artist’s patron was Piero di Lorenzo de’ Medici, known as Piero the Unfortunate. This Medici prince was a pale imitation of his famous father—weak where Lorenzo was strong, spoiled where he was generous. Having invited his father’s former protégé to live and work at the palace, Piero gave Michelangelo only one commission: to build a snowman in the courtyard.

If the commission was some kind of taunt or joke, Michelangelo betrayed no resentment. Instead, he created something so special that Giorgio Vasari, the Renaissance historian of artists, referred glowingly to its beauty.

The snowman lived on in peoples’ imaginations. According to Vasari, the artist Baccio Bandinelli (1493-1560), who possessed modest talent but towering ambition, was well aware of the precedent. One year when Florence was again covered in thick snow, he built a colossal snowman based on Marforio, a famous Roman sculpture. Bandinelli’s jealous obsession with Michelangelo was all too obvious.

In Brussels in 1511, during the “Winter of Death”—many weeks of snow and subfreezing temperatures—snowmen became potent expressions of social unrest. According to Bob Eckstein, author of the comprehensive “The History of the Snowman,” the city fathers sanctioned a snowman festival, perhaps in the hope of lifting people’s spirits.

But rather than play along, the citizens showed their contempt for the authorities by populating the city with snow-pornography and rude caricatures of eminent townspeople. The council wisely left the snowmen untouched, allowing them to melt away naturally when spring came.

Centuries later, snow became a medium for expressing patriotism rather than anger. During the Prussian siege of Paris in the winter of 1870-71, the national guardsmen stationed at the Bicêtre fortress in the city’s south had endured weeks of shelling when two of the company, the artists Hippolyte Moulin and Alexandre Falguière, put down their guns and picked up their sculpting tools.

Each created a snowwoman. Falguière’s “The Resistance” featured a heroic-looking woman sitting astride a cannon. Moulin’s “The Republic,” a massive snow-bust, wore a soft Phrygian cap, a symbol of liberty. These spontaneous monuments to national resolve may well have had a magical effect, reviving the soldiers’ will to fight. After the war, Falguière tried to re-create his snowwoman in other media, but he was never able to evoke the statue’s original spirit. Only the sketch remains.

This year, if you decide to make a snowman—or snowwoman—why not forget all that commercial business of a corncob pipe and button nose in favor of a little more art and soul.

Next ArticleWSJ Historically Speaking: A History of Dubious Hangover Cures