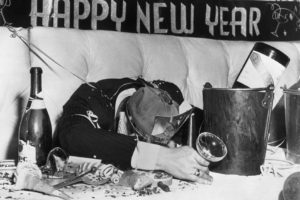 The aforesaid grapes appear to have been in a nonstop rage from at least 7000 B.C., when the Chinese were crushing them in a recipe that included fermented rice and honey. Since then, the world’s greatest minds, sober and not, have been searching for a hangover cure, or at the very least a negotiated truce.

The Mesopotamians had their own take on the idea. A text more than 3,000 years old, unearthed in the ancient city of Ugarit (modern Ras Shamra in Syria), includes a poem about the god El who became blind drunk at a party with some fellow gods. His wife and daughter found him in a sorry state the next morning. Fortunately, they knew what to do: They literally gave him the hair of a dog, in this case mixed with oil and plant-matter and placed on his forehead. (Coincidentally, the modern phrase “hair of the dog” comes from the idea that someone bitten by a rabid dog could be cured with a potion that included a hair of that animal, according to the Oxford Dictionary.)

For several millennia, many people preferred to wear rather than ingest their hangover cure. The Greek physician Galen (circa 129-216), advocated the use of cabbage leaves, which were to be wrapped tightly around the sufferer’s head. An alternative remedy, touted in a recently deciphered ancient Egyptian medical papyrus, argued that necklaces of laurel leaves were the most effective cure for the “drunken headache.”

The Romans had no compunction about swallowing all manner of dubious concoctions. The poet Horace recommended fried shrimps and African snails. Gladiators were said to have preferred deep-fried canaries. As a more preventive measure, the philosopher and soldier Pliny the Elder (A.D. 23-79) swore that raw owl’s eggs curbed an appetite for wine.

But for sheer revulsion, none of the ancient treatments can compete with the 17th-century cure devised by Jonathan Goddard, physician and ally of the English statesman Oliver Cromwell. Goddard’s drops, which claimed to cure everything from a hangover to apoplexy, were allegedly made from “five pounds of human cranium, taken from persons who had been hanged or had died a violent death, five pounds of dried vipers, two pounds of hartshorn and two pounds of ivory.” King Charles II is said to have paid Goddard £5,000 for the recipe.

By the 19th century, people had become a little less adventurous in their hangover cures, settling for such “innocuous” treatments as taking a dose of opium or drinking vinegar or warm milk mixed with soot.

There is, of course, a 20th-century remedy that doesn’t involve animals, cannibalism or physical torture. It’s known as the W.C. Fields cure: a martini made of 1 part vermouth, 4 parts gin and one olive.

Happy holidays, and remember, water is your brain’s best friend.

Next ArticleWSJ Historically Speaking: Juries, From the Ancient Athenians to ‘12 Angry Men’