WSJ Historically Speaking The Art of Partying, From Socrates to Capote 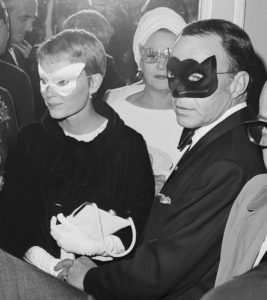 Frank Sinatra and his wife, actress Mia Farrow, as they arrive at Truman Capote’s Black and White Ball.

Last week marked the 50th anniversary of the most famous (or infamous) Hollywood-arts-money-politics-celebrity mash-up of the 20th century. What made Truman Capote’s Black and White Ball at New York’s Plaza Hotel in 1966 so special was the way he managed to bring together power players from every section of American society, from McGeorge Bundy (who had recently left the post of White House national security adviser) to Frank Sinatra. Some say that the ball inaugurated the era of the celebrity A-list.

Since then the A-list has partied at such memorable one-offs as the Rothschilds’ Surrealist Ball in 1972, held at their chateau near Paris, where Salvador Dalí and Audrey Hepburn ate off fur-lined plates and the servants dressed as cats. More recently, fashion czar Anna Wintour has presided every May over the Met Gala—officially a benefit for the New York Museum of Metropolitan Art’s Costume Institute. Beyoncé turned heads this year with a latex gown by Givenchy.

The most famous party in history was a symposium in Athens—a symposium being, for the ancients Greeks, a drinking party, often accompanied by food, musicians, dancers and good conversation. The tragic poet Agathon played host to this one around 416 B.C.

The historical details are hazy, but we know that Socrates was there, along with the playwright Aristophanes and other Athenian notables. According to Plato’s “Symposium,” the famous dialogue he wrote about the event, the men sent away a flute girl who was supposed to play to them, vowed to limit drinking (as they had gotten hammered the day before) and instead discussed the nature of love. Unlike most conversations at such gatherings, this one shaped philosophical thought for the next two millennia.

Going from the sublime to the ridiculous, in the 1st century A.D. the poet Gaius Petronius Arbiter poked fun at the excesses of Roman society in a fictional work called “Satyricon.” In one scene, Trimalchio, a parvenu who serves dishes like a boiled calf wearing a helmet, decides that a mere party isn’t enough and holds a mock funeral for himself.

It is believed that Petronius based Trimalchio on real people—there was no lack of models, such as the party-loving Vettii brothers of Pompeii who decorated their house with pornographic murals. In the 1920s, F. Scott Fitzgerald considered naming “The Great Gatsby,” with its party-giving protagonist, “Trimalchio in West Egg.”

Fiction has also kept alive the memory of the Duchess of Richmond’s society ball in Brussels on June 15, 1815. News of a sudden advance by a resurgent Napoleon interrupted the festivities. The Duke of Wellington coolly insisted on finishing his dinner, and many of his officers stayed so late that the next morning they wore evening attire to the Battle of Quatre Bras, a forerunner of Waterloo. The ball is chiefly remembered, however, for the scene in William Thackeray’s “Vanity Fair” where Amelia Osborne’s husband, George, makes a pass at her ruthless best friend, Becky Sharp.

As for the Black and White Ball, scholars have analyzed it and novelists such as Don DeLillo in “Underworld” (1997) have reimagined it, thus ensuring literary immortality. But what would probably please Capote even more is that, try as society might, no party has ever come close to capturing the magic of that starry night in New York.