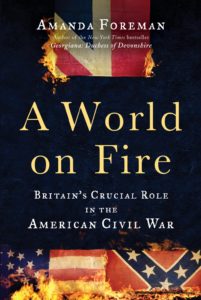 A World on Fire by American historian Amanda Foreman is a nice, big fat book for summer reading.

It’s a tale of affection, rivalry, suspicion, hostility and at times outright love set against the backdrop of the American Civil War, but really it’s about the relationship between Britain and the United States.

Foreman writes with authority, humour and a taste for detail, introducing us to the many Britons who gave their support, and sometimes their lives, to both North and South.

It’s history, but with an eye to the future. In the tensions and suspicions that play out between London and Washington, we begin to see the first green shoots of the “special relationship”.

This is history as it should be: full of detail, fun and promise.

Next ArticleWSJ Historically Speaking: Beyond Frosty: A History of Famous Snowmen