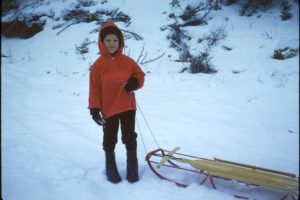 The sled symbolizes the all-American way of life—with its freedom, simplicity and comfort—that Kane lost when he gained his riches. It should be no surprise that another quintessential American classic, Frank Capra’s 1946 “It’s a Wonderful Life,” also has an iconic scene of children sledding on a wintry day.

Yet the sled is an unlikely symbol of wholesome Americana, let alone winter fun. The first evidence of sled use comes from the deserts of ancient Egypt rather than the tundra of Alaska. The Egyptians discovered that sprinkling water on sand created conditions that were similar to snow. A wall painting from the tomb of Djehutihotep (a powerful regional governor circa 1900 B.C.) confirms that the pyramids were built using carved rocks that were often dragged from great distances on sleds pulled by huge teams of laborers.

The earliest evidence of tobogganing may be a story from the Cimbric War, fought between Rome and the Germanic tribes (113-101 B.C.). In 103, the Cimbri caught the Romans by surprise after they successfully crossed the Alps into Northern Italy using their shields as sleds. Unfortunately, their inventiveness wasn’t matched by their self-discipline, and the Romans eventually outmaneuvered them in the Battle of Vercellae in 101.

Russian aristocrats were among the first to discover the potential of sledding for pure fun. As early as the 1650s, their gilded youth would risk life and limb riding down specially constructed wooden tracks in sleds carved from blocks of ice. French attempts to replicate these track-bound ice sleds foundered on the country’s warmer climate, but it did result in what appears to be the first roller coaster in 1817.

In the U.S., the big breakthrough for sledding came in the 1860s, when Henry Morton of South Paris, Maine, started producing hand-painted wooden sleds with metal runners. They were small enough that even children could manage them.

Morton’s speedy little vehicles helped to usher in a golden age of sledding and racing. In the 1880s, Albany in New York and St. Moritz in Switzerland started holding national bobsled competitions, leading to a still-unresolved dispute over which city originated the bobsled. Albany abandoned its races in 1889, however, after a fatal collision involving a spectator.

The dangers of sledding provided excellent dramatic fodder for writers such as Jack London and Louisa May Alcott, who based an entire novel, “Jack and Jill,” on a sledding accident. The most famous sledding story of all is Edith Wharton’s tragic novel “Ethan Frome” (1911), which was partly inspired by a fatal accident involving some teenagers from her hometown of Lenox, Mass.

Public alarm over sledding’s safety record began to recede in the 1910s, when Samuel Leeds Allen’s Flexible Flyer, with its hinged steering control, became available in department stores. Sales grew steadily throughout the ’20s, only to skyrocket during the Great Depression when cheap, self-driven entertainment was all that families could afford.

In good times and bad, Americans have found that nothing beats the joy of whooshing down a snow-covered hill.

Next ArticleWSJ Historically Speaking: The Long, Long Fall of Monarchy