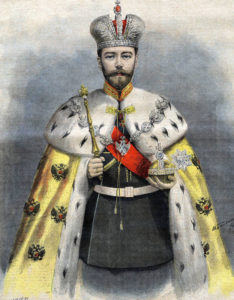 A portrait of Czar Nicholas II, published in a French newspaper in 1896. PHOTO: LEEMAGE/UIG/GETTY IMAGES

A hundred years ago, on March 14, 1917, just before midnight, the ministers of Czar Nicholas II informed him that the army was on the verge of mutiny. “What do you want me to do?” the Russian emperor reportedly asked. “Abdicate,” they replied. After a few minutes’ silence he agreed to go, thus bringing down the curtain on three centuries of Romanov rule.

Czar Nicholas was a good man but a catastrophically inept ruler whose failures reverberated around the world. Once he abdicated, the great monarchies started to fall like bowling pins, including the German (1918), Austro-Hungarian (1918), Ottoman (1922), Mongolian (1924) and Spanish (1931). In 1948, King Farouk of Egypt remarked: “The whole world is in revolt. Soon there will be only five kings left—the king of England, the king of spades, the king of clubs, the king of hearts and the king of diamonds.” He lost his own throne in 1952.

Monarchs still exist in 43 countries—11 of them in Europe. But whether they still retain some power or, as occurs far more often, serve as mere figureheads in constitutional monarchies, every regal ruler has had to deal with the same problem: how to pass on the throne. Relying on primogeniture, the custom of passing the crown to the eldest son, may be simple, but it’s full of risks.

The Christian prohibition against polygamy meant that European monarchies couldn’t hedge their bets against feckless, incapable or simply infertile heirs. King Henry VIII tried harder than most, killing two wives and divorcing another two in his attempts to have sons. But, with the exception of Czar Ivan the Terrible (1530-1584), who killed his heir apparent for disobeying him, the usual practice for ruling kings was to hope and pray that everything would turn out all right.

The Eastern model of relying on multiple wives and concubines to produce a plethora of royal sons didn’t work any better. The chosen heir could still end up being a dud. King Yeongjo (1694-1776) of Korea had his son, Crown Prince Sado, executed; it appears the prince had been a homicidal maniac with a thirst for sexual violence.

Having lived through a bloody succession crisis himself, Yongzheng, the fifth Qing emperor of China (1678-1735), sought to quell the infighting and intrigues by writing the name of his heir on a scroll and placing it inside a sealed box, to be opened after his death. His strategy proved successful, but the next emperor, Qianlong, jettisoned his father’s idea and crippled the court with the usual messy maneuvering.

The last surviving Romanov born in the Russian empire, Grand Duchess Leonida Georgievna, died in 2010, leaving various branches of the family to fight over the defunct throne. Holding power is inevitably temporary; seeking power is perpetual.

Next ArticleWSJ Historically Speaking: Baseball, From a Pharaoh to Hoboken, N.J.