As a quotation often attributed to Maya Angelou has it, ‘’You can tell a lot about a person by the way (s)he handles these three things: a rainy day, lost luggage and tangled Christmas tree lights.” I’m not sure what it says about me that I actually look forward to getting my hands on the latter. My house is so brightly decorated with energy-saving LEDs that it could double as a landing beacon on a foggy night. It’s the one thing I really missed when I lived abroad—no other country does Christmas lights like America. More than 80 million households put up lighting displays each December, creating a seasonal spike in U.S. energy use that’s bigger than the annual consumption of some small countries. 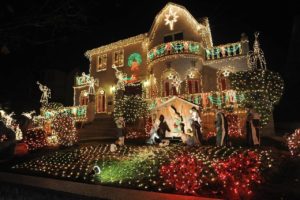 Hanging festive lighting during the winter solstice is an ancient practice, but the modern version owes its origins to Thomas Edison and his business partner Edward H. Johnson. Edison perfected the first fully functional lightbulb in 1879. For Christmas the following year, he strung up lights outside his Menlo Park factory—partly to provide good cheer but mostly to advertise the benefits of electrification. Johnson went one further in 1882, placing a Christmas tree decorated with 80 red, white and blue blinking lightbulbs on a revolving turntable in his parlor window in Manhattan.

Johnson repeated the display every year, much to the delight of New Yorkers, striving to make it bigger and better each time. He thus founded the other great American tradition: the competitive light display. The first person to take up Johnson’s challenge was President Grover Cleveland, who in 1894 erected an enormous multi-light Christmas tree in the White House, thereby starting a new presidential tradition.

The initial $300 price tag for an electrified Christmas tree (about $2,000 today) put it beyond the reach of the average consumer. The alternative was clip-on candles, but they were so hazardous that by 1910 most home insurance policies contained a nonpayment clause for house fires caused by candlelit Christmas trees. Although it was possible to rent electric Christmas lights for the season, and the General Electric Company was beginning to produce easy-to-assemble kits, the stark difference between lit and unlit homes threatened to become a powerful symbol of social inequality.

Fortunately, a New Yorker named Emilie D. Lee Herreshoff was on the case. She persuaded the city council to allow an electrified Christmas tree to be put up in Madison Square Park. The inaugural tree-lighting celebration, on December 24, 1912, generated so much public enthusiasm that within two years over 300 cities and towns were holding similar ceremonies.

Not content with just one festive tree, in 1920 the city of Pasadena, Calif., agreed to light up the 150 mature evergreens lining Santa Rosa Avenue, leading to its nickname “Christmas Tree Lane.” This was quite a feat of electrical engineering, given that outdoor Christmas lights didn’t become commercially available until 1927.

To encourage buyers, GE began sponsoring local holiday lighting contests, unleashing a competitive spirit each Yuletide that only seems to have grown stronger with the passing decades. Since 2014, the Guinness Book of World Records title for the most lights on a private residence has been held by the Gay family of LaGrangeville, N.Y., with strong competition from Australia. To which I say, “God bless them, everyone.”

Next ArticleHistorically Speaking: Whiskey Is the Original ‘Cup of Kindness’