“Embrace your Femininity and Watch ‘The Ascent of Woman'” 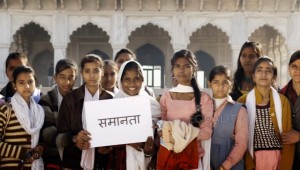 ‘The Ascent of Woman’

“In this series, I want to retell the story of civilization with men and women side by side for the first time.”

That’s one of the opening lines of Amanda Foreman’s BBC series, The Ascent of Woman. The series, which is now on Netflix, focuses on inserting women back into history. The four-part docu-series covers women’s role in everything from ancient civilization to modern day, making this the perfect crash course on feminism. So if you’ve even wondered about feminism and female oppression pre-Judith Butler but are too lazy to actually do any research, you now have a streaming option.

One of the greatest aspects of this docu-series is its matter-of-fact tone. Biographer and historian Amanda Foreman hosts the series, and from the first time she speaks, Foreman makes it clear she believes women have been oppressed in history and by our retelling of history. If you don’t agree with that statement or if you’re looking for a doc that will challenge your opinions about gender relations, The Ascent of Woman most likely isn’t for you. In that way, the docu-series limits its audience only to viewers who believe there are sexist undertones in our portrayal of history. However, while that approach does limit the series’ audience, it allows The Ascent of Woman to immediately dive into the historical deep ends.

The series starts in Catalhöyük in Turkey, a Neolithic civilization that researchers believe practiced far more gender equality and that worshipped a child-bearing goddess, called the Seated Woman. Soon after, the docu-series has made it to ancient Greece, a time when sexual purity is commodified and women are more idyllic than human. More than anything else, it’s this pace that shows how quickly cultural attitudes toward gender have historically changed. The content is interesting in and of itself, but the implications are even more fascinating. Topics such as racism and sexism can feel all-powerful and all-consuming, but looking at them through the enormous history of the civilization serves as a reminder that these things are social constructs that can be changed. However, the best part about this docu-series is how women-focused it remains down to the documentary’s narration. Between Foreman’s explanations, there are interviews from women historians, anthropologists, researchers, actors, and artists. This documentary is so deservedly women-focused and women-led that it’s actually jarring to see a man being interviewed. In a current media environment where experts are men by default, it’s refreshing to see so many accomplished female experts.

The Ascent of Woman isn’t without its problems. While most of the time Foreman’s conclusions come backed by her extensive research, some of her conclusions feel a bit under-explained. This again ties back to the documentary’s matter-of-fact tone, which doesn’t allow much room for alternative theories. But as a starter course on the global history of women, you can’t get much better than The Ascent of Woman. Next time you’re looking for something to make you feel intellectual, hit play on this feminist gem and get ready to learn about some incredible, history-changing members of Team Woman.

[Where to stream The Ascent of Woman]

Next ArticleThe New York Times: Historian Amanda Foreman upends the story of civilization to give women their due