WSJ Historically Speaking: When the Enemy Is at the Gates 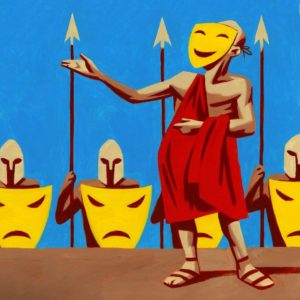 After a rebellion erupted in 2011 against Syrian President Bashar al-Assad, the city of Aleppo found itself split in two. Today, with help from Russia and Iran, Mr. Assad’s regime is laying waste to rebel-held parts of Aleppo. Mosques, museums, hospitals and schools there now lie in ruins. The image of a stunned, wounded little boy covered in soot and blood held the world’s attention briefly in August, as the siege went on. Many classrooms have moved underground, but the fact that schools continue to operate at all in Aleppo testifies to the determination of parents and educators to keep alive both civic values and culture.

Sieges have often drawn out such higher ideals and achievements, even as they show humanity at its brutal worst.

One shining example is the Athenians of two millennia ago. Raised on Homer’s account of the heroic deeds of besieged Troy, they took the epic’s message to heart and proudly maintained the city’s cultural life while under attack by Sparta all through the Peloponnesian war (431-404 B.C.). Over these decades, the playwright Aristophanes raised Athenian comedy to its greatest heights. In “The Acharnians” (425 B.C.), he dared to imagine what might happen if an ordinary citizen simply negotiated his own private peace with Sparta. Instead of calling the playwright a traitor, the Athenians gave the play first prize in their annual competition.

If the Athenians drew strength from comedy, Parisians in similar straits found solace in art and poetry. The Prussians besieged Paris for four months in 1870 and 1871, reducing some of the population to eating vermin. Conscripted into the National Guard, Edouard Manet brought his paints and easel along and used them. The famed cartoonist Honoré Daumier sketched pampered Parisian housewives and threatening Germans. Writer Victor Hugo (“Les Misérables”) stayed and wrote in “L’Année Terrible’” (“The Terrible Year,” an 1872 book of poems): ”The century is in the dock, and I am its witness.”

But no wartime event better demonstrates the power of art during a siege than the story of a performance of Dmitri Shostakovich’s Symphony No. 7. The Soviet composer, a Leningrad native, had started composing the work before the Nazis laid siege to the city in September 1941 and was evacuated before they arrived. He dedicated the completed work to the city.

It seemed unlikely, though, that Leningradians would survive long enough to hear a performance. By the spring of 1942 the population had gone beyond eating rats to boiling the flesh off corpses. Thousands were dying every day. At this point, Karl Eliasberg, the sole conductor left in Leningrad, decided to raise the city’s spirits by cobbling together an orchestra to play Shostakovich’s symphony. Some of the musicians who heeded his call were too weak to blow into their instruments. Yet Eliasberg kept them going through sheer force of personality.

On Aug. 9, 1942, Eliasberg’s ragtag orchestra performed the symphony to a transfixed audience while loudspeakers across the city simultaneously relayed the music. After 872 days, the city was liberated in January 1944. The Leningrad performance had symbolized to the besieged, and to millions around the world, that the forces of darkness would not prevail. Not then, not now.