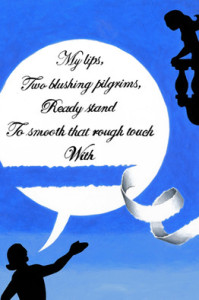 Since then, book burning and banning has been the ultimate blunt-force instrument for shaping young minds. But cut-and-pasting has also proven popular in some quarters, such as the Canadian publishers who removed references to Santa’s pipe when reprinting the poem “‘Twas the Night Before Christmas” and the U.S. publishers who in 2005 erased the ashtray from the nightstand in a revised version of the picture book classic “Goodnight Moon.”

But as the practice of trigger warnings demonstrates, there are many ways to prevent a writer’s true words from reaching his or her audience. Less than a century after William Shakespeare’s death, self-appointed editors began to fiddle with his plays. In 1681, the Irish poet Nahum Tate “improved” Shakespeare’s “King Lear”: The new version offered a happy ending in which Lear’s beloved daughter Cordelia is saved in the nick of time, and a fully compos mentis Lear promises to be less pompous and proud in the future. The popularity of Tate’s alternative ending meant that his Lear soon became the accepted version of the play, and British audiences remained largely ignorant of Shakespeare’s original script until the 1830s. But by then, it no longer mattered since an English philanthropist named Thomas Bowdler and his sister Henrietta had sanitized the Bard for the Victorian age with their “The Family Shakespeare.”

The Bowdlerized editions not only rescued many characters from themselves (Romeo and Juliet don’t have premarital sex, Ophelia drowns accidentally and so on), they also removed any rude or blasphemous lines. (Whole characters had to go.) Emboldened by their success, the Bowdlers went on to give the same treatment to Edward Gibbon’s “The Decline and Fall of the Roman Empire.”

Meanwhile, Victorian editors found much that was lamentable in the King James Bible. To deal with such awkward verses as Genesis 2:25 (“And they were both naked, the man and his wife, and were not ashamed”), some created a special appendix of expurgated lines. Others flagged “offensive” verses with brackets so they could be easily skipped when read aloud.

Even Plato didn’t escape the Victorian urge to protect defenseless readers. Benjamin Jowett (1817-93), master of Balliol College, Oxford, and a renowned classical scholar, took a firm line against any mentions of homosexuality. His translations of Plato’s works, which remained the standard texts for more than a century, were strictly gender-neutral affairs, with all references to “boyfriend” replaced by the more ambiguous term “beloved.”

Modern sensibilities may be so delicate now that trigger warnings must accompany every great work of literature. But remember Mozart’s reported response to Emperor Joseph II’s complaint that his music was “too beautiful for our ears and too many notes, my dear Mozart.” Mozart is said to have replied, “Exactly as many as necessary, Your Majesty.”