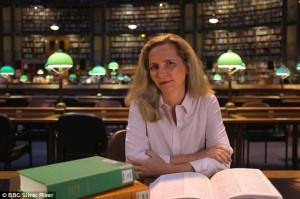 And so the good times continued for another 5,000 years, peaking with the advent of Enheduanna, daughter of the Sumerian King Sargon of Akkad, who appointed her priestess of the moon god Nanna in the city-state of Ur. Besides being wise and semi-divine, she wrote the first works of signed literature in history. In her Sumerian Temple Hymns, she wrote: ‘My king, something has been created that no one has created before.’ Clever girl. (As you’re not supposed to say these days: patronising.)

Then, with the Assyrians, it all went pear-shaped. This was the first culture to introduce the veil. The information came as quite a shock to one of the women, a Syrian, interviewed in Amanda Foreman’s The Ascent of Woman (BBC2, Wed). She had imagined that it was a legacy of much-later Islam and the fact that it wasn’t disturbed her, for it suggested that here was a form of oppression that owed more to ingrained male chauvinism than it did to divine wisdom.

Except, as Foreman pointed out, it’s not quite as simple as that. You could argue — as she duly did — that the veil was at least as much about ‘liberty and freedom’ as it was about ‘male ownership and control’. That’s because in a macho, brutal, warlike culture like Assyria’s, it would have been the only possible way that women could venture outside into the public space ‘without compromising themselves or losing the protection of their husbands’.

Coming from almost any other TV presenter save perhaps David Starkey, this would have sounded like a craven exercise in culturally relativist apologism. Foreman, though, appears determined to present this series wearing the mantle of a sober historian rather than that of a crusading social justice warrior or of an embittered representative of multiply-wronged womankind.

For which much thanks. The other week, I complained about the Darcyfication of TV drama, whereby everything from hunky Cap’n Poldark to the sexy rapist in The Fall now seems designed mainly to cater for women’s Fifty Shades fantasies, while male viewers have been jettisoned as virtual irrelevances. Ditto, TV history. When, I ask you, was the last in-depth documentary about the second world war with a voiceover by Sam West? They’ve all been replaced by simpering girlies telling us about 18th-century needlecraft, early feminist tracts, medieval vaginal decoration and stuff like that. No, actually not the last one: that would have been mildly interesting, so it would never have got commissioned.

Hence my extreme reluctance to watch The Ascent of Woman. I thought it was going to be as much fun as having your wife torture you over breakfast with the details of your pervy sexual preferences, as vouchsafed by your recently disclosed Ashley Madison profile: bitterness mixed with vindictive triumphalism. But because Foreman didn’t do it in an aggrieved, telling-off way — useful tip for wives and girlfriends that: never do it in an aggrieved, telling-off way — I came away feeling entertained, enlightened and, yes, even a little bit chastened.

Did you know that Pandora’s box actually refers to Pandora’s, ahem, ‘box’? That is, it’s another allegorical embodiment of an ingrained male notion that all the evils of the world spring forth from a woman’s naughty bits. Or that Aristotle was the originator of the Harry Enfield sketch ‘Woman: know your limits’? It is cause for pause, surely, that the civilisation we revere as one of the world’s greatest — Ancient Greece — forced on its womenfolk a lifestyle little less constrained and veiled than that experienced by modern Afghan women under the Taleban.

Next ArticleThe Times: Children wouldn’t die on a beach if women were in charge