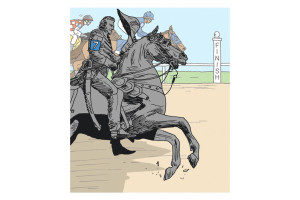 More than 100 million Americans are expected to bet in some way on this year’s NCAA men’s college basketball tournament–proving that the “madness” in March Madness is no mere expression. In 2013, according to Pregame.com, more than $12 billion was bet on the tournament—$2 billion more than on the Super Bowl. Between the slacking off, the drinking, the overeating and the surreptitious score-watching at work, one recent study predicts that March Madness will cost the U.S. $134 million in lost productivity and wages—all this despite the fact that in most U.S. jurisdictions, NCAA tournament pools remain totally illegal.

The U.S. has always had an uneasy relationship with gambling. Internet gambling remained illegal until this year—though that didn’t prevent Americans from spending more than $3 billion gambling online last year, according to the American Gaming Association. This great dichotomy in attitudes has been part of the national landscape since the early settlements in the 17th century. In Puritan New England, gambling wasn’t just a sin but a crime, whereas in the South, gambling was a gentlemen’s sport so long as it didn’t involve cockfighting. In the 1770s, the 13 colonies adopted a more robust attitude: Every one of them resorted to lottery schemes to raise revenue. Harvard, Yale, Columbia and Princeton all benefited from lottery money. Even the Revolutionary War was funded by lottery.

Gambling was never as ubiquitous in the U.S. as it was in the U.K., where, famously, the future second duke of Richmond was married to the earl of Cadogan’s daughter in 1719 as payment for the first duke’s losses at cards. But gambling was sufficiently tolerated in the U.S. for President Andrew Jackson’s gambling habit to pass unremarked. In fact, he was greatly admired as one of the country’s foremost racehorse trainers. But after his presidency ended in 1837, there was a gradual sea change in social attitudes. Victorian campaigners added gambling to their list of targets. The first to go were the state lotteries. By 1860, only three states still operated them. Fifty years later, virtually all forms of betting had been outlawed, except for horse racing in Kentucky and Maryland.

The Great Depression softened opinions a little, and in 1931, Nevada became the first state to reintroduce legal casino gambling. But no state followed suit until New Jersey in 1976. The political corruption that followed from New Jersey’s attempt to turn Atlantic City into a gambling Mecca dampened other states’ enthusiasm for the idea. As depicted in the recent film “American Hustle,” the FBI ultimately launched a sting operation (Abscam) to catch officials taking bribes for casino licenses. At least 31 people who were targeted, including Republican Sen. Larry Pressler of South Dakota and Bob Guccione,the publisher of Penthouse, both of whom refused point-blank to take the bait.

Meanwhile, the rest of the world set about transforming the mundane casino trade into a glamorous, multibillion-dollar industry. The novelist Ian Fleming hit the jackpot, so to speak, when he created his high-rolling spy, James Bond. Fleming’s character showed how to gamble with style: He wore a tux to the casino, drank vodka martinis and stuck to baccarat or roulette. In response to reader demand, Fleming wrote a guide for would-be gamblers that suggested bribing an attendant for a seat at the roulette table. Once seated, ignore the other players. Finally, “observe the chaos with interest and indulgence, secure in the knowledge of the symmetry of your own deadly system.”

Would Mr. Bond have succumbed to March Madness? According to Fleming, 007 believed that the only “deadly sin is to mistake bad play for bad luck.” The odds are he would have played.

Next ArticleSmithsonian Magazine: The Amazon Women: Is There Any Truth Behind the Myth?