Even if experts don’t always agree on the specifics, there is broad agreement on what inflation is and on its dangers. But this consensus is relatively new: The term “inflation” only came into general usage during the mid-19th century.

Long before that, Roman emperors struggled to address the nameless affliction by debasing their coinage, which only worsened the problem. By 268 AD, the silver content of the denarius had dropped to 0.5%, while the price of wheat had risen almost 200-fold. In 301, Emperor Diocletian tried to restore the value of Roman currency by imposing rigid controls on the economy. But the reforms addressed inflation’s symptoms rather than its causes. Even Diocletian’s government preferred to collect taxes in kind rather than in specie.

A lack of knowledge about the laws of supply and demand also doomed early Chinese experiments in paper money during the Southern Song, Mongol and Ming Dynasties. Too many notes wound up in circulation, leading to rampant inflation. Thinking that paper was the culprit, the Chongzhen Emperor hoped to restore stability by switching to silver coins. But these introduced other vulnerabilities. In the 1630s, the decline of Spanish silver from the New World (alongside a spate of crop failures) resulted in a money shortage—and a new round of inflation. The Ming Dynasty collapsed not long after, in 1644.

Spain was hardly in better shape. The country endured unrelenting inflation during the so-called Price Revolution in Europe in the 16th and 17th centuries, as populations increased, demand for goods spiraled and the purchasing power of silver collapsed. The French political theorist Jean Bodin recognized as early as 1568 that rising prices were connected to the amount of money circulating in the system. But his considered view was overlooked in the rush to find scapegoats, such as the Jews. 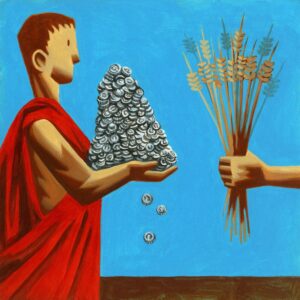 The great breakthrough came in the 18th century as classical economists led by Adam Smith argued that the market was governed by laws and could be studied like any other science. Smith also came close to identifying inflation, observing that wealth is destroyed when governments attempt to “inflate the currency.” The term “inflation” became common in the mid-19th century, particularly in the U.S., in the context of boom and bust cycles caused by an unsecured money supply.

Ironically, the worst cases of inflation during the 20th century coincided with the rise of increasingly sophisticated models for predicting it. The hyperinflation of the German Papiermark during the Weimar Republic in 1921-23 may be the most famous, but it pales in comparison to the Hungarian Pengo in 1945-46. Inflamed by the government’s weak response, prices doubled every 15 hours at their peak. The one billion trillion Pengo note was worth about one pound sterling. By 1949 the currency had gone—and so had Hungary’s democracy.

In 1982, the U.S. Federal Reserve under Paul Volcker achieved a historic victory over what became known as the Great Inflation of the 1960s and ‘70s. It did so through an aggressive regimen of high interest rates to curb spending. Ordinary Americans suffered high unemployment as a result, but the country endured. As with any affliction, it isn’t enough for doctors to identify the cause: The patient must be prepared to take his medicine.

Next ArticleHistorically Speaking: The Modern Flush Toilet Has Ancient Origins