Even the Minoans of Crete found ways to whisk away waste with flowing water.

Defecation is a great equalizer. As the 16th-century French Renaissance philosopher Michel de Montaigne put it trenchantly in his Essays, “Kings and philosophers shit, as do ladies.”

Yet, even if each person is equal before the loo, not all toilets are considered equal. Sitting or squatting, high or low-tech, single or dual flush: Every culture has preferences and prejudices. A top-end Japanese toilet with all the fixtures costs as much as a new car. 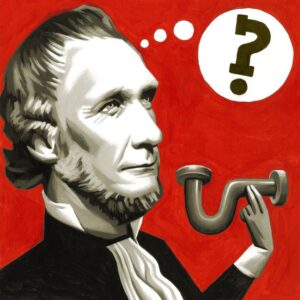 Pride in having the superior bathroom experience goes back to ancient times. As early as 2500 B.C., wealthy Mesopotamians could boast of having pedestal lavatories and underfloor piping that fed into cesspits. The Harappans of the Indus Valley Civilization went one better, building public drainage systems that enabled even ordinary dwellings to have bathrooms and toilets. Both, however, were surpassed by the Minoans of Crete, who invented the first known flush toilet, using roof cisterns that relied on the power of gravity to flush the contents into an underground sewer.

The Romans’ greatest contribution to sanitary comfort was the public restroom. By 300 B.C., Rome had nearly 150 public toilet facilities. These were communal, multi-seater affairs consisting of long stone benches with cut-out holes set over a channel of continuously running water. Setting high standards for hygiene, the restrooms had a second water trough for washing and sponging.

Although much knowledge and technology was lost during the Dark Ages, the Monty Python depiction of medieval society as unimaginably filthy was somewhat of an exaggeration. Castle bedrooms were often en-suite, with pipes running down the exterior walls or via internal channels to moats or cesspits. Waste management was fraught with danger, though—from mishaps as much as disease.

The most famous accident was the Erfurt Latrine Disaster. In 1184, King Henry VI of Germany convened a royal gathering at Petersburg Citadel in Erfurt, Thuringia. Unfortunately, the ancient hall was built over the citadel’s latrines. The meeting was in full swing when the wooden flooring suddenly collapsed, hurling many of the assembled nobles to their deaths in the cesspit below.

Another danger was the vulnerability of the sewage system to outside penetration. Less than 20 years after Erfurt, French troops in Normandy captured the English-held Chateau Gaillard by climbing up the waste shafts.

Thomas Crapper, contrary to lore, didn’t invent the modern toilet: He was the chief supplier to the royal household. Strangely for a country renowned for its number of bathrooms per household, the U.S. granted its first patent for a toilet—or “plunger closet”—only in 1857. As late as 1940, some 45% of households still had outhouses. The American toilet race, like the space race, only took off later, in the ‘50s. There is no sign of its slowing down. Coming to a galaxy near you: The cloud-connected toilet that keeps track of your vitals and cardiovascular health.

Next ArticleHistorically Speaking: The Quest to Understand Skin Cancer