From the Incas to the College Board, exams have been a popular way for societies to select an elite.

Last month, the University of Texas at Austin joined the growing list of colleges that have made standardized test scores optional for another year due to the pandemic. Last year, applicants were quick to take up the offer: Only 44% of high-school students who applied to college using the Common Application submitted SAT or ACT scores in 2020-21, compared with 77% the previous year.

Nobody relishes taking exams, yet every culture expects some kind of proof of educational attainment from its young. To enter Plato’s Academy in ancient Athens, a prospective student had to solve mathematical problems. Would-be doctors at one of the many medical schools in Ephesus had to participate in a two-day competition that tested their knowledge as well as their surgical skills. 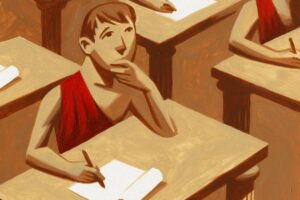 On the other side of the world, the Incas of Peru were no less demanding. Entry into the nobility required four years of rigorous instruction in the Quechua language, religion and history. At the end of the course students underwent a harsh examination lasting several days that tested their physical and mental endurance.

It was the Chinese who invented the written examination, as a means of improving the quality of imperial civil servants. During the reign of Empress Wu Zetian, China’s only female ruler, in the 7th century, the exam became a national rite of passage for the intelligentsia. Despite its burdensome academic requirements, several hundred thousand candidates took it every year. A geographical quota system was eventually introduced to prevent the richer regions of China from dominating.

Over the centuries, all that cramming for one exam stifled innovation and encouraged conformity. Still, the meritocratic nature of the Chinese imperial exam greatly impressed educational reformers in the West. In 1702, Trinity College, Cambridge became the first institution to require students to take exams in writing rather than orally. By the end of the 19th century, exams to enter a college or earn a degree had become a fixture in most European countries.

In the U.S., the reformer Horace Mann introduced standardized testing in Boston schools in the 1840s, hoping to raise the level of teaching and ensure that all citizens would have equal access to a good education. The College Board, a nonprofit organization founded by a group of colleges and high schools in 1899, established the first standardized test for university applicants.

Not every institution that adopted standardized testing had noble aims, however. The U.S. Army had experimented with multiple-choice intelligence tastes during World War I and found them useless as a predictive tool. But in the early 1920s, the president of Columbia University, Nicholas M. Butler, adopted the Thorndike Tests for Mental Alertness as part of the admissions process, believing it would limit the number of Jewish students.

The College Board adopted the SAT, a multiple-choice aptitude test, in 1926, as a fair and inclusive alternative to written exams, which were thought to be biased against poorer students. In the 1960s, civil rights activists began to argue that standardized tests like the SAT and ACT were biased against minority students, but despite the mounting criticisms, the tests seemed like a permanent part of American education—until now.

Next ArticleHistorically Speaking: The Long Fight to Take the Weekend Off