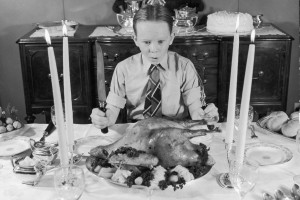 Despite its young age—a mere 152 years—Thanksgiving has deep roots in the American psyche. It was already popular when President Lincoln first established the holiday on the fourth Thursday of every November. In 1842, two decades before Lincoln’s decree, Nathaniel Hawthorne declared Thanksgiving Day “a good old festival; and my wife and I have kept it with our hearts, and besides have made good cheer upon our turkey, and pudding, and pies, and custards.”

The bliss of home life combined with the culinary delights of turkey, pudding and pies also featured in the writings of Harriet Beecher Stowe (“The Old New England Thanksgiving”) and Louisa May Alcott (“An Old-Fashioned Thanksgiving”). Such paeans were in perfect accord with the original intentions behind the holiday. Sarah Hale, the journalist who led the campaign to have Thanksgiving accorded federal status, wrote in 1868: “The enjoyments are social, the feastings are domestic, therefore this annual festival is really the exponent of family happiness and household piety.

But soon the literary community began to express its doubts and reservations. Mark Twain was among the first to point out some of the contradictions underlying the “thanks” in Thanksgiving, writing in his autobiography that New Englanders were simply celebrating that “they had succeeded in exterminating their neighbors, the Indians, during the previous 12 months.”

The feminist author Charlotte Perkins Gilman followed suit in 1909 with a short story entitled “Three Thanksgivings,” which painted a rather grim picture of the holiday as a festival of relatives behaving badly to each other. By the 1930s, Sarah Hale’s view of Thanksgiving as a time of unalloyed happiness and patriotism was in retreat.

Next to suffer a hit was the turkey. F. Scott Fitzgerald was not alone in finding the oversize bird a chore to cook and a bore to eat. In a moment of idleness he composed an ironic list of 13 ways to deal with leftover turkey. No. 7 was “Turkey à la Crême: Prepare the crême a day in advance. Deluge the turkey with it and cook for six days over a blast furnace. Wrap in fly paper and serve.”

This dour trend received a boost with books like Rick Moody’s 1994 “The Ice Storm,” a tale of Thanksgiving adultery, drunkenness and deadly tragedy. Soon it wasn’t only the turkey, or the family, that had Thanksgiving in the firing line, but the very idea that America was worthy of thanks. Of all the literary denunciations of Thanksgiving, perhaps the most vitriolic remains “The Thanksgiving Prayer” (1986) by William S. Burroughs, which ends its litany of complaints with: “Thanks for the last and greatest / betrayal of the last and greatest / of human dreams.”

In recent years, while not exactly loving the holiday, some novelists have begun to make peace with it. As Philip Roth wrote in his 1997 Pulitzer Prize-winning novel “American Pastoral,” Thanksgiving is “a moratorium on all the grievances and resentments…and it lasts twenty-four hours.”

Next ArticleThe Sunday Times: America must mend its marriage before thoughts turn to divorce