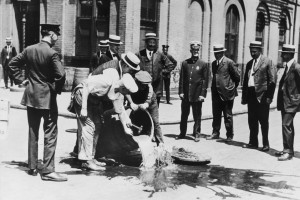 The Chinese emperors were among the first to regard the convivial nature of alcohol as a threat to political control. Their attempts to restrict its consumption, according to Chinese legend, began around 2070 B.C. with Yu the Great, founder of the Xia, China’s earliest dynasty. He declared an outright alcohol ban. Subsequent emperors balked at being quite so drastic, but they tried almost everything else, from forbidding three or more people to drink together “for no reason” to making it a capital crime for courtesans to be caught drinking.

Official disapproval didn’t relax until the introduction around 1600 of tobacco, which the Ming Dynasty emperors regarded as an even greater public menace than alcohol. The rapidity with which rich and poor took up smoking, and the way it allowed the classes to mingle, was seen as proof that social order was breaking down. Until his suicide in 1644, the last Ming emperor Chongzhen (1611-1644) waged a bloody though ultimately ineffectual battle against tobacco.

The Ming weren’t the only ones to war against the liberating effects of the leaf and the vine. The Ottoman Turks, whose empire made them the leaders of the Muslim world starting in the 14th century, regarded alcohol and tobacco—as well as coffee drinking—as a threat to their authority.

All three were present in Constantinople’s ubiquitous coffee houses, where patrons openly discussed news, politics, literature and ideas all day long. Convinced that coffeehouse culture fomented rebellion, Sultan Murad IV (1612-1640), a longtime alcoholic, ordered the closing of every coffee house and the beheading of anyone caught smoking or drinking. It’s said that the sultan would patrol the streets of Constantinople with his personal executioner, taking great delight in bringing death and terror to the people.

In the 18th century the fears of every despot did indeed appear to come true, when coffee houses throughout the 13 American colonies became incubators of revolutionary ideals. The Green Dragon coffeehouse tavern in Boston played host to the Sons of Liberty, while Thomas Jefferson, John Adams and Benjamin Franklin all patronized the City tavern in Philadelphia.

The speakeasies of Prohibition didn’t produce anything as august as the 1776 Revolution. But from Louis Armstrong to F. Scott Fitzgerald, some of the most celebrated American music and writing emerged from speakeasy culture. It wasn’t the vices themselves that led to new ideas, but rather the liberty and space to indulge them.