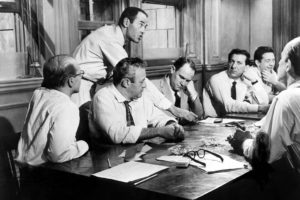 On jury duty this month, I’ve had plenty of time to reflect on the meaning of the 1957 film “12 Angry Men.” Law schools still use the 60-year-old courtroom drama about a biased and easily swayed jury as a teaching tool. The question remains: Does the movie prove or disprove Mark Twain’s characterization of trial by jury as “the most ingenious and infallible agency for defeating justice that human wisdom could contrive”?

Jurors are all too human, something the ancient Greeks tried to mitigate by allowing some jury panels to have 1,000 or more citizens at a time. To prevent malicious plots and ensure a broad mix of people, every juror received half a drachma a day—enough to feed a poor man and his family. But such precautions failed to save Socrates from his enemies in 399 B.C. An Athenian jury, egged on by an anti-Socrates faction, convicted him of “impiety” and “moral corruption of the young” by a majority of 280-221.

The reputation of juries suffered further under Rome, as panels shrank to a range of 35 to 75 and jury packing became an art form. In the medieval period, disgust with the jury system (or a general lack of faith in humanity) encouraged many ancient societies to rely on trial by ordeal. In a typical procedure overseen by clergy and described by Robert Bartlett in his book “Trial by Fire and Water,” a man accused of a crime would have to fast for three days, pick up a hot iron, walk three paces and put the iron down. Three days later, if his hand was healing, he was innocent; “if the wound was unclean, he was guilty.” Another test involved immersion in a cold pool; the innocent would sink.

Juries staged a comeback after 1215, when Pope Innocent III banned clergymen from conducting ordeals. The same year in England, King John signed the Magna Carta, which forbade a man’s punishment without “the lawful judgment of his peers.” The widespread use of a dozen jurors may have been inspired by the number of Christian apostles.

These and other rules governing jury trials evolved slowly over hundreds of years, but one practice began almost immediately: making jury duty as onerous as possible. Until the mid-19th century both British and American courts could forbid jurors from eating and drinking until they reached a verdict.

The tactic failed spectacularly in 1670 during the London trial of the Quaker William Penn, who had been arrested for violating an act limiting religious assemblies. The jury resisted the judge’s instruction to return a guilty verdict despite being denied food, water, fire and tobacco for several days. Their refusal to be bullied set a precedent, known as Bushel’s Case, that no jury can be punished for its verdict. As for Penn, he went on to found Pennsylvania.

A quarter of a century after Penn’s trial, former jurors in Salem, Mass., set another precedent after they published a collective letter of apology for their roles in the famed 1692 witch trails, which had led to 19 executions. Five years after the last trial, the jurors wrote, “We would none of us do such things again.”

Juries have been rebelling and regretting ever since. Despite Twain’s pessimism, the messy fallibility of juries is what gives the legal system its humanity. As the British jurist Lord Devlin wrote during the Cold War, “Trial by jury…is the lamp that shows that freedom lives.”

Next ArticleEVENT: In Conversation with Richard Mason, author 'Who Killed Piet Barol?'