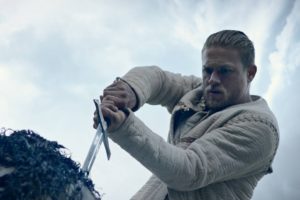 What went wrong? High on the list of critics’ complaints was the rewriting of Arthur’s character and story to make him seem more down-to-earth and less like the virtuous leader of legend. The Journal’s Joe Morgenstern called the film “a choppy hunt for the grim, the grungy, the darkness of dungeons and the clamor of a war-torn world.”

Ordinarily, filmmakers might get away with playing fast and loose with a fictional character. But Arthur is different. For one thing, some people really think he once lived: Pilgrims have been visiting his alleged grave in England’s Glastonbury Abbey since the 12th century, though analysis of the site suggests abbey monks may have made up the claim to raise funds after a fire. But Arthur is real in a psychological sense as well, the epitome of the flawed hero, the great man whose unwavering belief in his own righteousness leads to fatal mistakes.

The fascination with this tragedy has lasted almost a millennium. The story first appeared after the Norman conquest of England in 1066. The vanquished English, in need of a national hero, found him in a “History of the Kings of Britain,” a work of “fake history” from around 1136 by an Oxford cleric named Geoffrey of Monmouth. He combined several figures to create Arthur, a British fifth-century military commander who drove the Romans out of eastern France, only to have his triumph cut short by treason at home. Geoffrey’s work also includes the wizard Merlin and Queen Guinevere.

The “History” was immensely popular, especially in medieval France. The King Arthur story married easily with the new Gallic literary tradition of chivalry and courtly love. Naturally, the French couldn’t help adding a few spicy details of their own, such as Guinevere’s adultery, the semi-mystical Round Table of noble knights and the quest for the Holy Grail. The castle of Camelot appeared. But the essential story of a paradise lost though human frailty remained the same.

Still, that story needed an author with the genius to unify and immortalize these various elements. The person who succeeded in this knightly task couldn’t have been less likely. Thomas Malory seems to have been a violent thief, extortionist and accused rapist. He spent a lot of time in jail. In the midst of England’s 15th-century civil war, known as the Wars of the Roses, Malory was jailed again, now as a political prisoner. He apparently spent his time imagining a once and future England full of valor and nobility, translating all the various Arthur pieces into an English prose work under the title “Le Morte D’Arthur,” published posthumously in 1485. It became the foundation for almost all the famous Arthurian writings to come.

The Camelot legends—along with their themes of idealism, courage, betrayal and loss—deeply influenced Chaucer and Miguel de Cervantes, the author of “Don Quixote.” More recently, versions of the tales were written by Alfred Lord Tennyson, John Steinbeck and T.H. White (“The Once and Future King,” 1958).

When Jackie Kennedy said of her husband’s tenure at the White House, “There will never be another Camelot,” people knew what she meant. Nobody seems to know what “King Arthur: Legend of the Sword” was supposed to mean, if anything, and that’s its tragedy.

Next ArticleWSJ Historically Speaking: A History of Colors and Their Owners