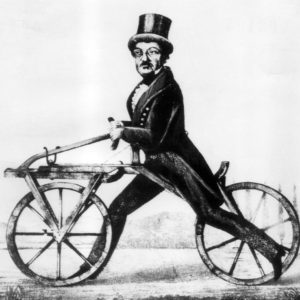 Velocipedes become an international phenomenon, like roller blades two centuries later, but fell out of fashion just as quickly. It wasn’t until 1870, when James Starley invented the Penny Farthing, with its one giant wheel and another much smaller one, that people began to see the potential in bicycles. Still, as Mark Twain discovered every time that he encountered a pebble or rut, the Penny Farthing was only for the very fit or the foolhardy. He fell off so often that he quipped, “Get a bicycle. You will not regret it, if you live.”

Fifteen years later, John Starley, the inventor’s nephew, created the “safety bicycle,” with its equal-size wheels, the front one steerable. Now anyone could learn to ride a bike. Almost overnight, women took to lighter and less restrictive fashions. The bicycle become a symbol of women’s empowerment. The suffragist Susan B Anthony said in 1896: “I stand and rejoice every time I see a woman ride by on a wheel.”

The idea of women on bicycles enraged certain conservative elements of society. Cycling was said to make women oversexed, ill-behaved or infertile. “Have you ever seen anything more off-putting, uglier, meaner than a wench on a bike?” asked the German magazine Youth in 1897. That same year, protesting male students at Cambridge University hanged an effigy of a woman on a bike.

Despite such ugly incidents, the bicycle was changing how people moved—and influencing new forms of transport. In the late 1890s, Wilbur and Orville Wright were at work in the back room of their bicycle shop, using their bike tools and repair skills to refine their designs for an airplane. In 1903, all that expertise helped the Wright Flyer to achieve its maiden voyage at Kitty Hawk.

The bicycle also pedaled its way into art. By 1913 the conceptual artist Marcel Duchamp had attached a wheel to a kitchen stool for his sculpture “Bicycle Wheel,” while in 1942 Picasso went him one better, transforming an ordinary bicycle saddle and handle bars into a “Bull’s Head.” But no artist is more closely associated with the bicycle than the writer Samuel Beckett, who fell in love with cycling while touring France’s chateau country. In his 1951 novel “Molloy,” Beckett has the title character ride forth on a bicycle odyssey full of existential meaning—only to accidentally run over a dog.

With bicycles, unlike driverless cars, the human element will always matter.