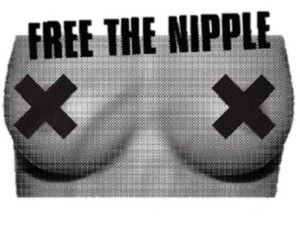 The obvious link between these two issues would be to say that one is fuelling the other. The nipple-bearing narcissists are encouraging, even provoking, young men to behave in ways that would never happen if women would only cover themselves up. But I don’t think that’s true at all. If anything, the countries with the strictest expectations of female modesty also bear witness to some of the worst examples of male sexual violence. Nor do I have a problem with nudity. Many moons and five children ago, Tatler photographed a number of writers and artists in the nude (all very Tatler and tasteful), of whom I was one.

But I do have a problem with the American tendency to confuse life-and-death struggles for personal freedom with exhibitionistic demonstrations of myopic selfregard. The former has a long and proud history in the US, the latter is a baby-boom phenomenon the millennial generation has transformed into an art form.

With regard to the #FreeTheNipple protesters, quite simply, there is nothing left to free. These women are leading a cultural and political struggle that exists only in their minds. The breast, and everything else, is out there. The hardcore pornographer and publisher of Hustler magazine, Larry Flynt — made famous by Milos Forman’s biopic The People vs Larry Flynt — won the battle of the nipple for them. For good or ill, baring all in America has become no more transgressive than vomiting in public. Both are considered entirely excusable in a three-year-old; a rite of passage in a 23-year-old, and de rigueur for a certain kind of rock star. Quite what Scout Willis and the other protesters think they will achieve is really baffling.

The work quietly taking place in Washington, on the other hand, as the campus sexual assault taskforce goes about amassing information and offering new recommendations, will make a difference. The key here is that the legislators and activists who have congregated on Capitol Hill understand the principles that are at stake and why it is so vital to defend them.

A college rife with threats and acts of sexual assault isn’t merely unpleasant, it is a statement by the authorities about the fundamental position of women relative to men, and what constitutes equal access to education. In March, for example, an anonymous female student at Cairo University was filmed being chased and attacked by male undergraduates, a large proportion of them law students, as she tried to make her way across the campus. The extraordinary courage of the unknown woman, in her yellow hijab, pink shirt and black trousers, as she dared to assert the same right to the university’s public spaces as the men, makes mincemeat of the faux bravery of the #FreeTheNipple crowd.

There is not only no comparison between them and her, but the former are frankly an embarrassment to the term American freedoms. The half-naked protesters in New York face nothing except the eventual boredom of the media. Theirs is a trivial campaign conducted by privileged urbanites with too much time on their hands.

What they are portraying as an act of protest on behalf of women is in fact a thoughtless squandering of the freedoms that women everywhere are still fighting to obtain. And for that I can’t forgive them.

Next ArticleWSJ Historically Speaking: When a Monarch Calls It Quits