There have been female soldiers since antiquity, but only in modern times have military forces accepted and integrated them

“War is men’s business,” Prince Hector of Troy declares in Homer’s Iliad, a sentiment shared by almost every culture since the beginning of history. But Hector was wrong. War is women’s business, too, even though their roles are frequently overlooked.

The integration of women into the military is a fundamental difference between the ancient and modern worlds. In the past, a weapon-wielding woman was seen as symbolizing the shame and emasculation of men. Among the foundation myths depicted on the Parthenon are scenes of the Athenian army defeating the Amazons, a race of warrior women.

Such propaganda couldn’t hide, however, the fact that in real life the Greeks and Romans on occasion fought and even lost against female commanders. Artemisia I of Caria was one of the Persian king Xerxes’s most successful naval commanders. Hearing about her exploits against the Greeks during the Battle of Salamis in 480 B.C., he is alleged to have exclaimed: “My men have become women, and my women men.” The Romans crushed Queen Boudica’s revolt in what is now eastern England in 61 A.D., but not before she had destroyed the 9th Roman Legion and massacred 70,000 others.

The medieval church was similarly torn between ideology and reality in its attitude toward female Christian warriors. Yet women did take part in the Crusades. Most famously, Queen Eleanor of Aquitaine accompanied her husband King Louis VII of France on the Second Crusade (1147-1149) and was by far the better strategist of the two. However, Eleanor’s enemies cited her presence as proof that she was a gender-bending harlot. 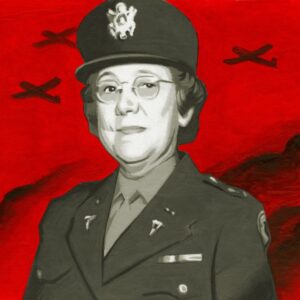 Florence Aby Blanchfield was the first woman to receive a regular commission with the U.S. Army

For centuries, the easiest way for a woman to become a soldier was to pass as a boy. In 1782, Massachusetts-born Deborah Sampson became one of the first American women to fight for her country by enlisting as a youth named Robert Shurtleff. During the Civil War, anywhere between 400 and 750 women practiced similar deceptions.

A dire personnel shortage finally opened a legal route for women to enter the Armed Forces. Unable to meet its recruitment targets, in March, 1917, the U.S. Navy announced that it would allow all qualified persons to enlist in the reserves. Loretta Perfectus Walsh, a secretary in the Philadelphia naval recruiting office, signed up almost immediately. The publicity surrounding her enlistment as the Navy’s first female chief yeoman encouraged thousands more to step forward.

World War II proved to be similarly transformative. In the U.S., more than 350,000 women served in uniform. In Britain, Queen Elizabeth II made history by becoming a military mechanic in the women’s branch of the British Army.

Although military women have made steady gains in terms of parity, the debate over their presence is by no means over. Yet the “firsts” keep coming. In June, Adm. Linda L. Fagan of the U.S. Coast Guard became the first woman to lead a branch of the U.S. Armed Forces. In the past as now, whatever the challenge, there’s always been a woman keen to accept it.

Next ArticleHistorically Speaking: The Mystical Origins of Wordplay