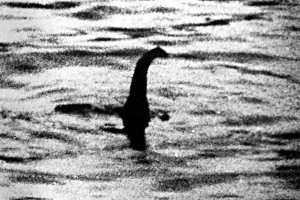 With sightings of the Loch Ness monster growing rarer each year, the latest theory among Nessie enthusiasts is that she was a giant catfish.

The species, released into the loch by the Victorians, can survive in frigid waters. If the theory is correct, it will have solved the mystery of the Loch Ness Monster, a popular obsession since the 1930s. That and the fact that a BBC research team scoured the loch in 2003, using satellites and 600 sonar beams, all to no avail.

It’s been a tough few years for the field of cryptozoology, as monster hunting is known in polite circles. Take the kraken, which the medieval Nordics believed could crush a ship with its mighty tentacles. Alfred, Lord Tennyson imagined it as the most primeval of all the terrors of the sea: “Below the thunders of the upper deep, / Far, far beneath in the abysmal sea, / …The Kraken sleepeth.”

Kraken-like creatures were a popular trope in 19th- and early 20th-century literature, from Jules Verne’s “Twenty Thousand Leagues Under the Sea” to H.P. Lovecraft’s horror stories. Herman Melville in “Moby-Dick” (1851) was one of the few to see the kraken’s true nature: “We now gazed at the most wondrous phenomenon which the secret seas have hitherto revealed to mankind. A vast pulpy mass, furlongs in length and breadth…innumerable long arms radiating from its centre, and curling and twisting like a nest of anacondas.” The “mysterious creature,” concluded Melville, was probably “among the class of cuttlefish.”

In the 1850s, the Danish naturalist Japetus Steenstrup tentatively identified Architeuthis dux (ruling squid) from an old carcass. Only in 2012 did a team of marine scientists film the species, which can grow to nearly 60 feet long, in its natural habitat. They confirmed that the squid might look dangerous to humans but only eats other fish.

In 2013, it was the turn of the Himalayan yeti, or Abominable Snowman, to fall under the myth-busting microscope of science. The legend of the yeti—supposedly a hairy ape—was already well-established when Alexander the Great conquered the Indus Valley in 326 B.C. Intrigued, he failed to persuade the locals to reveal its hiding place.

The yeti remained a local tradition until the 20th century, when European mountain climbers suddenly began reporting dozens of sightings. Some took fuzzy-looking photos. Climbers on Mount Everest were particularly prone to yeti fever, including Everest pioneers Sir Edmund Hillary and Tenzing Norgay, who thought they had found its footprints. Hillary even led an unsuccessful expedition in 1960 to capture the creature.

No one has ever found conclusive proof of the Abominable Snowman, because it isn’t a man but a bear. According to a genetic study published by Britain’s Royal Society in 2014, DNA from two different alleged samples shows that the yeti is almost certainly a bear, either a new species or a hybrid between a brown bear and an ancient polar bear.

With Nessie being reduced to a catfish, the kraken to a squid and the yeti to a taller version of Winnie-the-Pooh, the world is a safer place. Though perhaps a little less interesting.

Next ArticleThe Sunday Times: Click with care - we’re close to giving the bad guys control of the internet