Why ‘The Greatest Show on Earth’ foundered—and what’s next 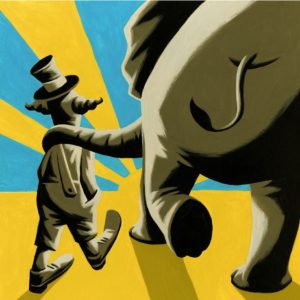 The modern circus, which celebrates its 250th anniversary this year, has attracted such famous fans as Queen Victoria, Charles Dickens and Ernest Hemingway, who wrote in 1953, “It’s the only spectacle I know that, while you watch it, gives the quality of a truly happy dream.”

Recently, however, the “happy dream” has struggled with lawsuits, high-profile bankruptcies and killer clown scares inspired in part by the evil Pennywise in Stephen King’s “It.” Even the new Hugh Jackman -led circus film, “The Greatest Showman,” comes with an ironic twist. The surprise hit—about the legendary impresario P.T. Barnum, co-founder of “The Greatest Show on Earth”—arrives on the heels of last year’s closing of the actual Ringling Bros., Barnum and Bailey Circus, after 146 years in business.

The word circus is Roman, but Roman and modern circuses do not share the same roots. Rome’s giant Circus Maximus, which could hold some 150,000 people, was more of a sporting arena than a theatrical venue, built to hold races, athletic competitions and executions. The Roman satirist Juvenal was alluding to the popular appeal of such spectacles when he coined the phrase “bread and circuses,” assailing citizens’ lack of interest in politics.

Circus-type entertainments could be hideously violent: In 17th-century Britain, dogs tore into bears and chimpanzees. A humane change of pace came in 1768, when Philip Astley, often called the father of the modern circus, put on his first show in London, in a simple horse-riding ring. He found that a circle 42 feet in diameter was ideal for using centrifugal force as an aid in balancing on a horse’s back while doing tricks. It’s a size still used today. Between the horse shows, he scheduled clowning and tumbling acts.Circuses in fledgling America, with its long distances, shortage of venues and lack of large cities, found the European model too static and costly. In 1808, Hachaliah Bailey took the circus in a new direction by making animals the real stars, particularly an African elephant named Old Bet. The focus on animal spectacles became the American model, while Europeans still emphasized human performers.

When railroads spread across America, circuses could ship their menageries. Already famous for his museums and “freak shows,” P.T. Barnum and his partners joined forces with rivals and used special circus trains to create the largest circus in the country. Although Barnum played up the animal and human oddities in his “sideshow,” the marquee attraction was Jumbo the Elephant. In its final year, the Ringling Bros. animal contingent, according to a news report, included tigers, camels, horses, kangaroos and snakes. The elephants had already retired.

Once animal-rights protests and rising travel costs started eroding profitability in the late 20th century, the American circus became trapped by its own history. But the success of Canada’s Cirque du Soleil, which since its 1984 debut has conquered the globe with its astounding acrobatics and staging, shows that the older European tradition introduced by Astley still has the power to inspire wonder. The future may well lie in looking backward, to the era when the stars of the show were the people in the ring.