There’s no hiding the fact that mushrooms, though delicious, have a dark side

Fall means mushroom season. And, oh, what joy. The Romans called mushrooms the food of the gods; to the ancient Chinese, they contained the elixir of life; and for many people, anything with truffles is the next best thing to a taste of heaven.

Lovers of mushrooms are known as mycophiles, while haters are mycophobes. Both sets have good reasons for feeling so strongly. The medicinal properties of mushrooms have been recognized for thousands of years. The ancient Chinese herbal text “Shen Nong Ben Cao Jing,” written down sometime during the Eastern Han Dynasty, 25-220 AD, was among the earliest medical treatises to highlight the immune-boosting powers of the reishi mushroom, also known as lingzhi.

The hallucinogenic powers of certain mushrooms were also widely known. Many societies, from the ancient Mayans to the Vikings, used psilocybin-containing fungi, popularly known as magic mushrooms, to achieve altered states either during religious rituals or in preparation for battle. One of the very few pre-Hispanic texts to survive Spanish destruction, the Codex Yuta Tnoho or Vindobonensis Mexicanus I, reveals the central role played by the mushroom in the cosmology of the Mixtecs. 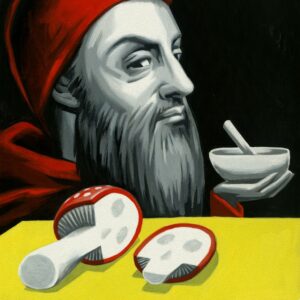 There is no hiding the fact that mushrooms have a dark side, however. Fewer than 100 species are actually poisonous out of the thousands of varieties that have been identified. But some are so deadly—the death cap (Amanita phalloides), for example—that recovery is uncertain even with swift treatment. Murder by mushroom is a staple of crime writing, although modern forensic science has made it impossible to disguise.

There is a strong possibility that this is how the Roman Emperor Claudius died on Oct. 13, 54 A.D. The alleged perpetrator, his fourth wife Agrippina the Younger, wanted to clear the path for her son Nero to sit on the imperial throne. Nero dutifully deified the late emperor, as was Roman custom. But according to the historian Dio Cassius, he revealed his true feelings by joking that mushrooms were surely a dish for gods, since Claudius, by means of a mushroom, had become a god.

Another victim of the death cap mushroom, it has been speculated, was Pope Clement VII in 1534, who is best known for opposing King Henry VIII’s attempt to get rid of Catherine of Aragon, the first of his six wives. Two centuries later, in what was almost certainly an accident, Holy Roman Emperor King Charles VI died in Vienna on Oct. 20, 1740, after attempting to treat a cold and fever with his favorite dish of stewed mushrooms.

Of course, mushrooms don’t need to be lethal to be dangerous. Ergot fungus, which looks like innocuous black seeds, can contaminate cereal grains, notably rye. Its baleful effects include twitching, convulsions, the sensation of burning, and terrifying hallucinations. The Renaissance painter Hieronymus Bosch may well have been suffering from ergotism, known as St. Anthony’s Fire in his day, when he painted his depictions of hell. Less clear is whether ergotism was behind the strange symptoms recorded among some of the townspeople during the Salem witch panic of 1692-93.

Unfortunately, the mushroom’s mixed reputation deterred scientific research into its many uses. But earlier this year a small study in the Journal of Psychopharmacology found evidence to support what many college students already believe: Magic mushrooms can be therapeutic. Medication containing psilocybin had an antidepressant effect over the course of a year. More studies are needed, but I know one thing for sure: Sautéed mushrooms and garlic are a recipe for happiness.