Unlike men’s clothes, female fashion has been indifferent for centuries to creating ways for women to stash things in their garments

The current round of Fashion Weeks started in New York on Sep. 9 and will end in Paris on Oct. 4, with London and Milan slotted in between. Amid the usual impractical and unwearable outfits on stage, some designers went their own way and featured—gasp—women’s wear with large pockets.

The anti-pocket prejudice in women’s clothing runs deep. In 1954, the French designer Christian Dior stated: “Men have pockets to keep things in, women for decoration.” Designers seem to think that their idea of how a woman should look outweighs what she needs from her clothes. That mentality probably explains why a 2018 survey found that 100% of the pockets in men’s jeans were large enough to fit a midsize cellphone, but only 40% of women’s jeans pockets measured up.

The pocket is an ancient idea, initially designed as a pouch that was tied or sewn to a belt beneath a layer of clothing. Otzi, the 5,300-year-old ice mummy I wrote about recently for having the world’s oldest known tattoos, also wore an early version of a pocket; it contained his fire-starting tools. 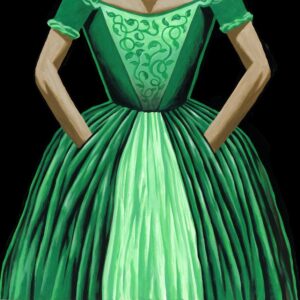 The ancient concept was so practical that the same basic design was still in use during the medieval era. Attempts to find other storage solutions usually came up short. In the 16th century a man’s codpiece sometimes served as an alternative holdall, despite the awkwardness of having to fish around your crotch to find things. Its fall from favor at the end of the 1600s coincided with the first in-seam pockets for men.

It was at this stage that the pocket divided into “his” and “hers” styles. Women retained the tie-on version; the fashion for wide dresses allowed plenty of room to hang a pouch underneath the layers of petticoats. But it was also impractical since reaching a pocket required lifting the layers up.

Moralists looked askance at women’s pockets, which seemed to defy male oversight and could potentially be a hiding place for love letters, money and makeup. On the other hand, in the 17th century a maidservant was able to thwart the unwelcome advances of the diarist Samuel Pepys by grabbing a pin from her pocket and threatening to stab him with it, according to his own account.

Matters looked up for women in the 18th century with the inclusion of side slits on dresses that allowed them direct access to their pockets. Newspapers began to carry advertisements for articles made especially to be carried in them. Sewing kits and snuff boxes were popular items, as were miniature “conversation cards” containing witty remarks “to create mirth in mixed companies.”

Increasingly, though, the essential difference between men’s and women’s pockets—his being accessible and almost anywhere, hers being hidden and nestled near her groin—gave them symbolism. Among the macabre acts committed by the Victorian serial killer Jack the Ripper was the disemboweling of his victims’ pockets, which he left splayed open next to their bodies.

Women had been agitating for more practical dress styles since the formation of the Rational Dress Society in Britain in 1881, but it took the upheavals caused by World War I for real change to happen. Women’s pantsuits started to appear in the 1920s. First lady Eleanor Roosevelt caused a sensation by appearing in one in 1933. The real revolution began in 1934, with the introduction of Levi’s bluejeans for women, 61 years after the originals for men. The women’s front pocket was born. And one day, with luck, it will grow up to be the same size as men’s.

If you’ve ever had a dream involving the Queen, you are not alone. After her Silver Jubilee in 1977, it was estimated that more than a third of Britons had dreamt about her at least once, with even ardent republicans confessing to receiving royal visits in their slumbers. For the past 70 years, the Queen has been more than just a presence in our lives, subconscious or otherwise; she has been a source of fascination, inspiration and national pride. 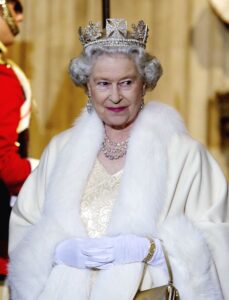 When Princess Elizabeth became Queen in 1952, the country was still struggling to emerge from the shadow of World War II. Her youth offered a break with the past. Time magazine in the United States named her its ‘Woman of the Year’, not because of anything she had achieved but because of the hope she represented for Britain’s future. A barrister and political hopeful named Margaret Thatcher wrote in the Sunday Graphic that having a queen ought to remove “the last shreds of prejudice against women aspiring to the highest places”. After all, Elizabeth II was a wife and mother of two small children, and yet no one was suggesting that family life made her unfit to rule.

Thatcher’s optimism belied the Queen’s dilemma over how to craft her identity as a modern monarch in a traditional role. At the beginning, tradition seemed to have the upper hand: a bagpiper played beneath her window every morning (a holdover from Queen Victoria). The Queen knew she didn’t want to be defined by the past. “Some people have expressed the hope that my reign may mark a new Elizabethan age,” she stated in 1953. “Frankly, I do not myself feel at all like my great Tudor forbear.”

Nevertheless, the historical parallels between the two queens are instructive. Elizabeth I created a public persona, yet made it authentic. Fakery was impossible, since “we princes,” she observed, “are set on stages in the sight and view of all the world.” Although Elizabeth I was a consummate performer, her actions were grounded in sincere belief. She began her reign by turning her coronation into a great public event. Observers were shocked by her willingness to interact with the crowds, but the celebrations laid the foundation for a new relationship between the queen and her subjects.

The introduction of television cameras for Elizabeth II’s coronation performed a similar function. In the 1860s, the journalist Walter Bagehot observed that society itself is a kind of “theatrical show” where “the climax of the play is the Queen”. The 1953 broadcast enabled 27 million Britons and 55 million Americans to participate in the ‘show’ from the comfort of their homes. It was a new kind of intimacy that demanded more from Elizabeth II than any previous monarch. 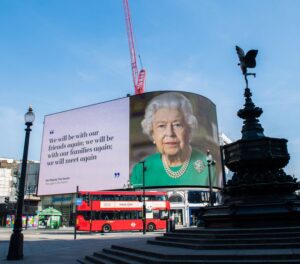 The Queen had resisted being filmed, but having been convinced by Prince Philip of its necessity, she worked to master the medium. She practised reading off a teleprompter so that her 1957 Christmas speech, the first to be telecast, would appear warm and natural. Harking back to Elizabeth I, she admitted: “I cannot lead you into battle, I do not give you laws or administer justice, but I can do some­thing else, I can give you my heart and my devotion.” She vowed to fight for “fundamental principles” while not being “afraid of the future”.

In practice, embracing the future could be as groundbreaking as instituting the royal “walkabout”, or as subtle as adjusting her hemline to rest at the knee. Indeed, establishing her own sense of fashion was one of the first successes of Elizabeth II’s reign. Its essence was pure glamour, but the designs were performing a double duty: nothing could be too patterned, too hot, too shiny or too sheer, or else it wouldn’t photograph well. Her wardrobe carried the subversive message that dresses should be made to work for the wearer, not the other way round. In an era when female celebrity was becoming increasingly tied to “sexiness”, the Queen offered a different kind of confident femininity. Never afraid to wear bright blocks of colour, she has encouraged generations of women to think beyond merely blending in.

The opportunity to demonstrate her “fund­amental principles” on the international stage came in 1961, during a Cold War crisis involving Ghana. The Queen was due to go on a state visit, until growing violence there led to calls for it to be cancelled. She not only insisted on keeping the engage­ment, but during the wildly popular trip, she also made a point of dancing with President Kwame Nkrumah at a state ball. Her adept handling of the situation helped to prevent Ghana from switching allegiance to the Soviet Union. Just as important, though, was the coverage given to her rejection of contemporary racism. As Harold Macmillan noted: “She loves her duty and means to be Queen and not a puppet.” This determination has seen her through 14 prime ministers, 14 US presidents, seven popes and 265 official overseas visits.

At the beginning of the Covid epidemic in 2020, with the nation in shock at the sudden cessation of ordinary life, Elizabeth II spoke directly to the country, sharing a wartime memory to remind people of what can be endured. “We will succeed,” she promised, and in that desperate moment, she united us all in hope. The uniqueness of the Queen lies in her ability to weather change with grace and equanimity – as the poet Philip Larkin once wrote: “In times when nothing stood/but worsened, or grew strange/there was one constant good:/she did not change.” That steadfast continuity, so rare in a world of permanent flux, is an endless source of inspiration for artists and writers, designers and composers, all of us.