The Pentagon Papers—a secret Defense Department review of America’s involvement in the Vietnam War—became public 50 years ago next week. The ensuing Supreme Court case guaranteed the freedom of the press to report government malfeasance, but the U.S. military analyst behind the revelation, Daniel Ellsberg, still ended up being prosecuted for espionage. Luckily for him, the charges were dropped after the trial became caught up in the Watergate scandal.

The twists and turns surrounding the Pentagon Papers have a uniquely American flavor to them. At the time, no other country regarded whistleblowing as a basic right.

The origins of whistleblowing are far less idealistic. The idea is descended from Roman ‘‘Qui Tam’’ laws, from a Latin phrase meaning “he who sues for himself does also for the king.” The Qui Tam laws served a policing function by giving informers a financial incentive to turn in wrong-doers. A citizen who successfully sued over malfeasance was rewarded with a portion of the defendant’s estate. 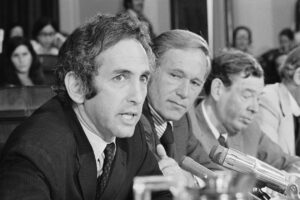 Daniel Ellsberg, left, testifying before members of Congress on July 28, 1971, several weeks after the publication of the Pentagon Papers.
PHOTO: BETTMANN ARCHIVE/GETTY IMAGES

Anglo-Saxon law retained a crude version of Qui Tam. At first primarily aimed at punishing Sabbath-breakers, it evolved into whistleblowing against corruption. In 1360, the English monarch Edward III resorted to Qui Tam-style laws to encourage the reporting of jurors and public officials who accepted bribes.

Whistleblowers could never be sure that those in power wouldn’t retaliate, however. The fate of two American sailors in the Revolutionary War, Richard Marven and Samuel Shaw, was a case in point. The men were imprisoned for libel after they reported the commander of the navy, Esek Hopkins, for a string of abuses, including the torture of British prisoners of war. In desperation they petitioned the Continental Congress for redress. Eager to assert its authority, the Congress not only paid the men’s legal bill but also passed what is generally held to be the first whistleblower-protection law in history. The law was strengthened during the Civil War via the False Claims Act, to deter the sale of shoddy military supplies.

These early laws framed such actions as an expression of patriotism. The phrase “to blow the whistle” only emerged in the 1920s, but by then U.S. whistleblowing culture had already reigned in the corporate behemoth Standard Oil. In 1902, a clerk glanced over some documents that he had been ordered to burn, only to realize they contained evidence of wrongdoing. He passed them to a friend, and they reached journalist Ida Tarbell, forming a vital part of her expose of Standard Oil’s monopolistic abuses.

During World War II, the World Jewish Congress requested special permission from the government to ransom Jewish refugees in Romania and German-occupied France. A Treasury Department lawyer named Joshua E. Dubois Jr. discovered that State Department officials were surreptitiously preventing the money from going abroad. He threatened to go public with the evidence, forcing a reluctant President Franklin Roosevelt to establish the War Refugee Board.

Over the past half-century, the number of corporate and government whistleblowers has grown enormously. Nowadays, the Internet is awash with Wikileaks-style whistleblowers. But in contrast to the saga of the Pentagon Papers, which became a turning point in the Vietnam War and concluded with Mr. Ellsberg’s vindication, it’s not clear what the release of classified documents by Julian Assange, Chelsea Manning and Edward Snowden has achieved. To some, the three are heroes; to others, they are simply spies.